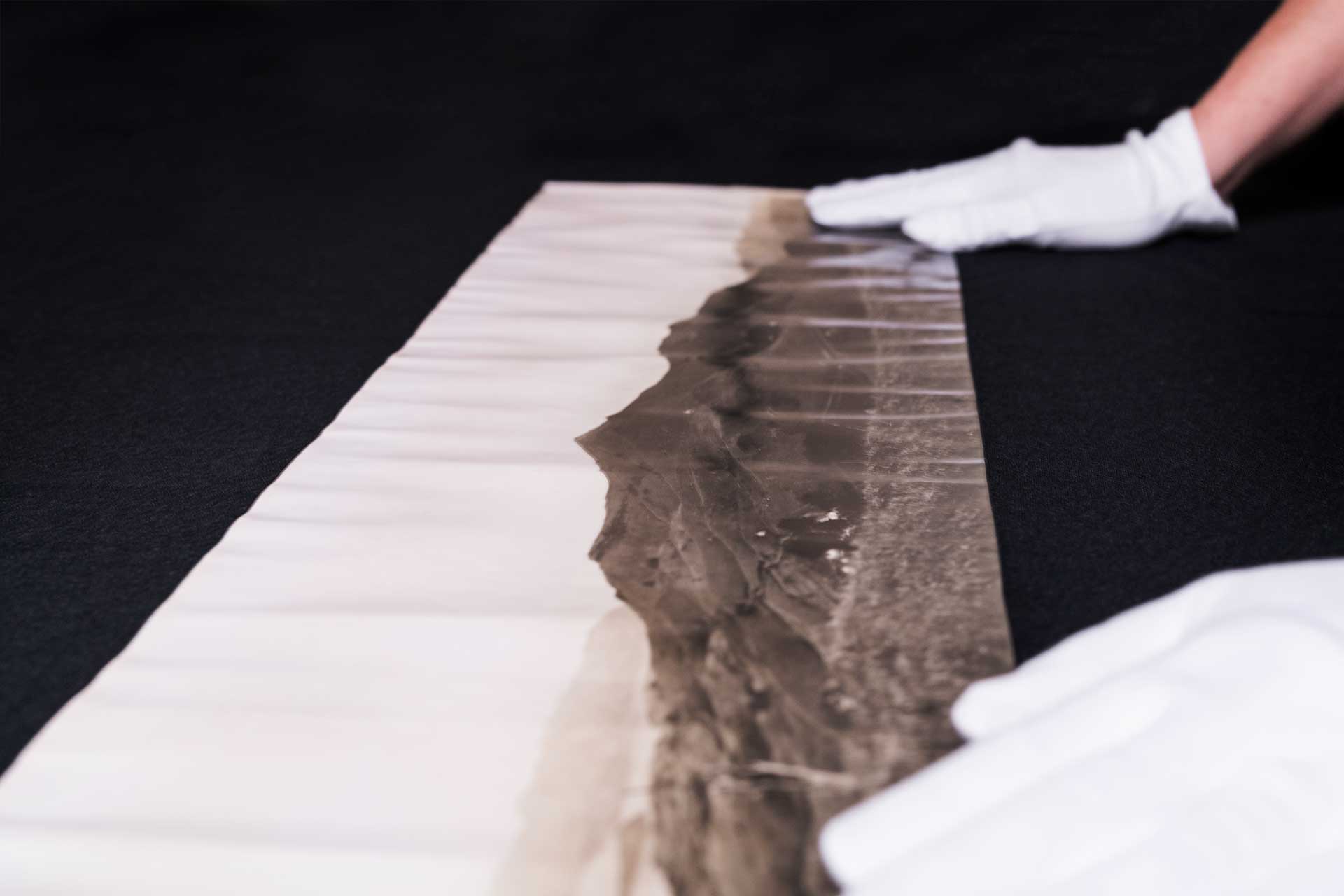 Photographs frequently tell a story, sometimes revealing things that cannot be put into words. They can serve as a connection to the past; a reminder of people, places, and significant events. These are some of the reasons why it is important to protect photographs for future generations. Unlike digital photographs from more recent eras, older photographs usually only exist in a single physical form — so if damaged, they risk being lost forever. Proper preservation techniques are essential; heat, humidity, light, and mishandling can irreparably damage photographic prints and film. To safeguard this material indefinitely digitisation is the best solution.

One of our customers recently delivered a silver gelatin print (c.1920s) to our Christchurch office to be digitised. Our team were excited to discover that the print was created by Robert Percy Moore, an influential New Zealand photographer, and portrays a panorama landscape of Christchurch’s Banks Peninsula.

Moore took the photo in c.1920 from Summit Road and it looks down onto a large homestead — this building now the well-known Hilltop Tavern. In the background Ōnawe Peninsula and Akaroa Harbour is visible, as well as a winding road that leads down to Barrys Bay and Duvauchelle.

Originally from Christchurch New Zealand, Moore began his career as a photographer during World War Two travelling through Queensland Australia taking photographs of landscapes to adorn postcards, as well as portraits of soldiers. In 1919 Moore opened his first photography studio at 379 Kent Street in Sydney. There he began to work as a commercial photographer and produced some of his earliest recorded panoramas – a genre he later became renowned for.

In 1923 Moore moved back to New Zealand and opened up another studio at 88 Manners Street in Wellington – many of his panoramas bear the imprint of this address. He specialised in panoramic photographs made with a Cirkut camera and received commissions from the New Zealand Government’s Tourist and Publicity Department.

Considered one of New Zealand’s most significant panoramic photographers, Moore travelled extensively across the North and South Island, capturing 1920s life and culture. He photographed developing cities, townships, private homes, working farms, public events, and idyllic rural scenery. Many of his photographs have notable historic value, particularly those depicting Christchurch heritage buildings, which are now damaged or demolished because of the 2010 and 2011 earthquakes.

Our technicians digitised Moore’s print using a Fuji Lanovia C550 flatbed scanner set to capture at a high-resolution of 600ppi and in 16bit colour. The Lanovia scanner produces excellent results because of its maximum density (dmax) of 4.1. This is superior to the average scanner which has a dmax of just 2.4. A high-density range allows for the ability to capture tonal differences, a wide range of contrast, and extremes in light and shadow.

The print had some silvering as well as some small tears from being handled and stored. Silvering is a form of photo damage occurring to silver-based emulsions, it can be identified as a metallic mirroring effect on the surface of a photograph. Our customer requested a retouched copy of the digitised image — we were able to repair some of the damage and increase the tonal contrast of the background so the Akaroa foothills were more visible.

Moore used a Cirkut camera to take his panoramic photographs. It takes 40-50 seconds to create a photograph, mechanically rotating from left to right during the exposure. The camera was innovative for its time because it allowed for the capture of a wide landscape or a large group of people within a single photograph.

The film used in a Cirkut camera was the largest professional format ever made; Moore’s negatives were often a meter in length! His final prints, such as the one we digitised, were the result of a contact print. These are created by placing a film negative over light sensitive paper in a darkroom, exposing it to light, and then processing it with photographic chemicals — a positive image the same size as the film is produced.

The manufacturer of the Cirkut camera, Century Camera Company, describes it as “…a most complete affair, [to be] used in the ordinary manner for plates when desired [or with] a panoramic attachment. The attachment […] contains the mechanism which, when the outfit is in operation, unwinds the film past a slot on a roller and in so doing exposes it and at the same time revolves the camera about on an axis, a special tripod and top being furnished. A pressure on the release is all that is necessary to start the motor — another pressure stops it, thus negatives of any desired length up to 6 feet [or] 7 feet […] may be made. A complete circle of 360 degrees may thus be photographed if desired.”

Get in touch with us at NZMS if you have heritage photographic prints or film; we can provide a thorough assessment and offer digitisation services. Our team are passionate about protecting cultural heritage and ensuring important work, like that of R.P Moore’s panoramas, are not lost.