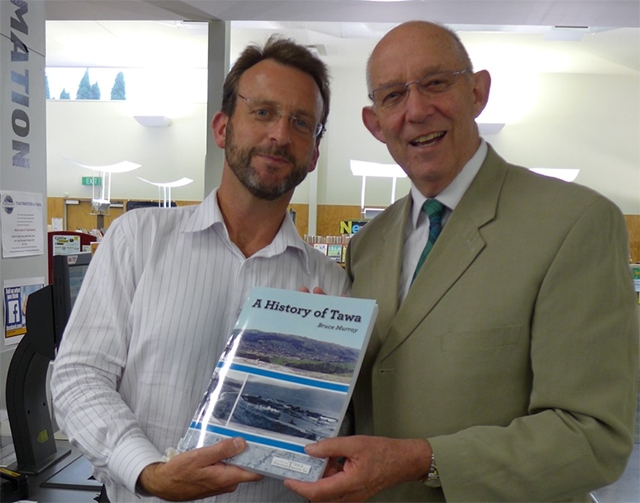 Andy Fenton | Digitise | News
November 14, 2014
It was a pleasure to attend this launch at Tawa Library.  Mayor Celia Wade-Brown “launched” the book, and had clearly done her research.  She admitted only time for a skim-read but cited many relevant passages (and noted with good humour – “it pays to start from rear in such circumstances to highlight the important bits!”), but what impressed me most was her ability to link them to her own experiences of the suburb.  The audience was clearly impressed…  and that appreciative audience was full of living Tawa legends who I shall not name; who serve this community in so many incredible and inspirational ways.  Tawa is indeed a remarkable community; it’s so much more than just a (dormitory) suburb, as is testimony by the ~250-page book Bruce Murray and his colleagues from the Tawa Historical Society have put together. 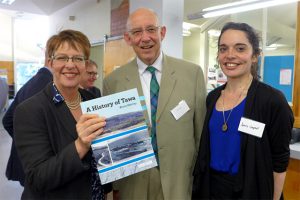 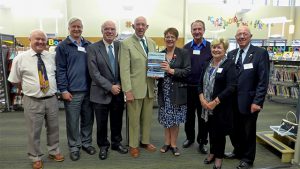 Celia and Bruce both spoke very well, and Bruce gave eloquent and effusive praise to those who contributed.  Both speakers acknowledged NZMS and Porirua Print, the latter for their efforts in putting the publication together in its printed form, and NZMS for our digitisation work – I’m sure I can speak for Debbie in saying we are very proud as local businesses to have been associated with all of THS’s publications – that’s what firms like ours and Porirua Print do in communities like ours!  You’ll see in our News section some recent updates on Sheryl, our General Manager, and Bruce very generously and compassionately spoke highly of her efforts to provide exemplary service and wishing her well.  It was heartwarming for me to be in the audience to the rear of the room and hear this about one of my staff.
I have lived within this community for 24 years – built two businesses, developed property, raised a family (work-in-progress!) , jogged and cycled all over it and belonged to various clubs, Boards and community groups… and throughout the launch I knew exactly what I love so much about it: the people, the village-like atmosphere, the schools, the library, the local businesses and shops, and the sports clubs and facilities.  Your neighbours look out for you, our street barbecues and family membership of www.neighbourly.co.nz  set community records, and it’s a terrific place to bring up kids accordingly.  As the book records in its conclusion: “…the surrounding hills continue to protect its strong sense of community, and do-it-yourself attitude”.  It’s great to be part of that!
The Tawa Historical Society epitomises this; since 2005 it has published a dozen books and booklets about Tawa.  The process involved in researching and writing about a range of topics related to Tawa’s past which gave them enough of a perspective to write a more general history of the Tawa district, including Takapu Valley.
I hope other communities are as lucky as mine!
Andy Fenton
November, 2014
Images of the launch are © S. Murray, 2014. Our thanks to Shona Murray for allowing us to share her photographs of the event.

“A History of Tawa” covers a period of more than five centuries. The opening chapter deals with the physical setting and the first inhabitants of the area. The remainder of the book follows a chronological path, noting the significant developments within the district since 1840. In particular, it chronicles such matters as the removal of the bush cover and its replacement by grass; the importance of the road to Wellington; changes in agriculture; the arrival of the railway; attempts at suburbanisation; the critical effects on Tawa of the Tawa Flat railway deviation and the motorway; the post WW2 boom in population; and the impact on Tawa of Johnsonville’s and Porirua’s shopping malls.
“A History of Tawa” contains 256 pages, and is liberally illustrated. It includes 65 photographs, 17 maps, 15 tables, and 11 illustrations, and has, for example, population figures which include results from the 2013 census, and photos not only back to 1865, but also recent panoramas and pictures. It is written by Bruce Murray, an historical geographer by training, a teacher of geography and history, and a Tawa resident for half a century.
Tawa is fortunate that its history has been well documented in the past. Elsdon Best’s newspaper articles of 1914, Porirua and they who settled it, was the first. Arthur Carman’s “Tawa Flat and the old Porirua Road”published in 1956, continues to be a goldmine of information. Ken Cassells’ “Tawa – Enterprise and Endeavour” of 1988, which recorded not only Tawa’s history but also the demise of the Tawa Borough Council, is similarly valuable. We believe that it is timely for a new, updated history of our district to appear, and that this latest publication will both complement and enhance the stories of the northernmost suburb of New Zealand’s capital city.
The cost of “A History of Tawa” is $45.00, and it can be purchased from the Tawa Library on the Main Road, or ordered through the Tawa Historical Society’s PO Box 56-076, Tawa 5249. Visit www.tawahistory.org.nz