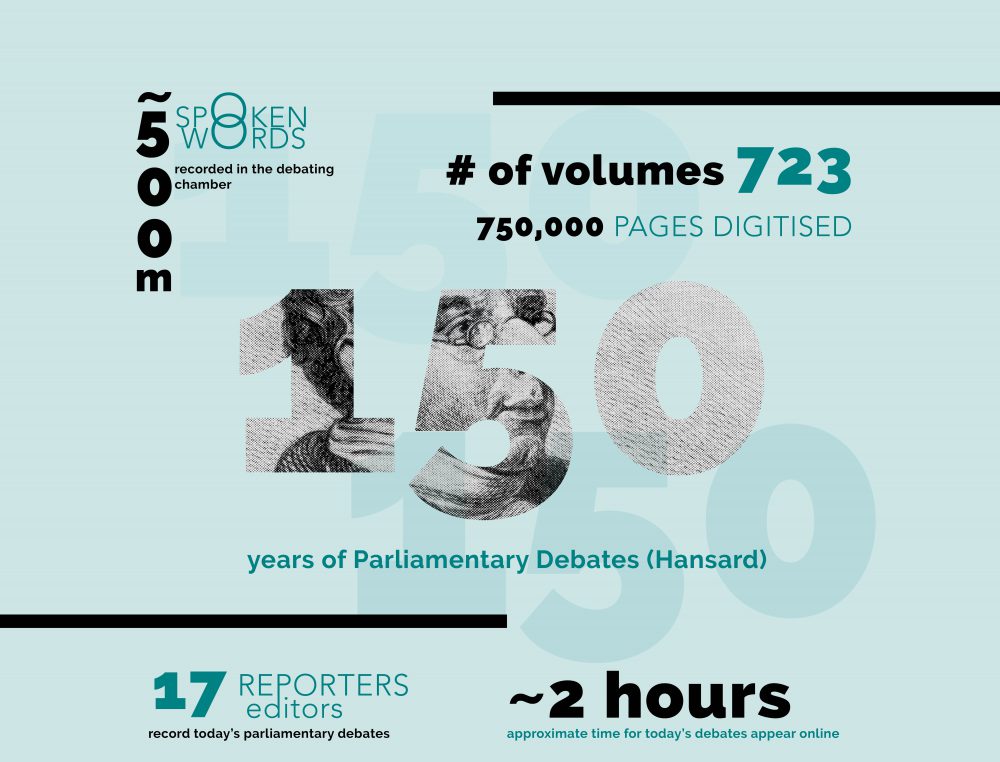 50 years ago a team of independent reporters began writing down everything politicians said in debates at Parliament. They stood for truth and accountability and their work continues to this day. The team and their written record is known as Hansard.
Over the month of July the Office of the Clerk acknowledged and celebrated the centenary of the official record of Parliamentary Debates being kept which included the digitisation of every word ever spoken in the House.  With the upcoming election, we at NZMS thought we’d take some to share a bit of history about Hansard and some of digitisation specifics of the project because we’re interested in and been involved in the (mass-) conversion of New Zealand’s documented history into discoverable, searchable, repurposable formats.
Key Facts about Hansard

About the Digitisation Process
Our Managing Director, Andy Fenton, recently participated in a (NZ Libraries) listserv discussion on the celebration of the sesquicentenary of Hansard – discussing the specifics about the digitisation of Hansard, and raised some observations, many compliments, and some questions about the newly available online version. Peter Riches from the Office of the Clerk kindly responded with the following information.

If anyone has additional queries you are welcome to contact the Parliamentary Information Service parlinfo@parliament.govt.nz.
The Hansard records are not only important for historical researchers, lawyers, courts and political science students but assure the New Zealand public that the MP’s they voted for speak on the issues we, the public, voted for.  Their content is a seminal record of New Zealand’s history.  We think it’s intriguing that this material was digitised in the US over a decade ago and has hitherto been unavailable online till very recently (we are grateful!).   The fact it was digitised overseas (albeit inaccessible) essentially put on hold the decision to digitise it in New Zealand (if we could have afforded to do so).  Andy Fenton has talked about the value proposition behind the digitising and OCR methodologies and this merits further discussion for other similar cultural heritage material we feel.
The Hansard records have been published courtesy of The University of California and Google and shared by The Hathi Trust.  We at NZMS offer our thanks to the staff of the Office of the Clerk of the House of Representatives, the Parliamentary Library, The National Library and University of Canterbury Library whose collective efforts resulted in this material being made available to the public.
We at NZMS also believe The Hathi Trust deserves a massive shoutout: they now have ~6M volumes (of 15.75M volumes digitised) available in the public domain … and that is a wonderful contribution to humankind.
Further Reading:
To read more about the 150th centenary of Hansard visit:
https://www.parliament.nz/en/pb/hansard-debates/for-the-record-150-years-of-hansard/
The importance of NZ Newspapers:
“More difficult was finding an accurate account of the debates between 1854 and 1867, before Hansard was created. During this period the only record was provided by the press, and reporting was politicised and patchy.  “If the newspaper didn’t like the members, they just didn’t report them,” Riches said.  Nevertheless, five volumes of Hansard have been patched together from newspaper reports over these 13 years.”
About NZ newspapers (a personal plea to save them):
http://www.micrographics.co.nz/case-studies/save-our-papers
The New Zealand Herald Article:
There’s a fantastic selection of Highlights uttered over the decades provided:
http://www.nzherald.co.nz/nz/news/article.cfm?c_id=1&objectid=11885704