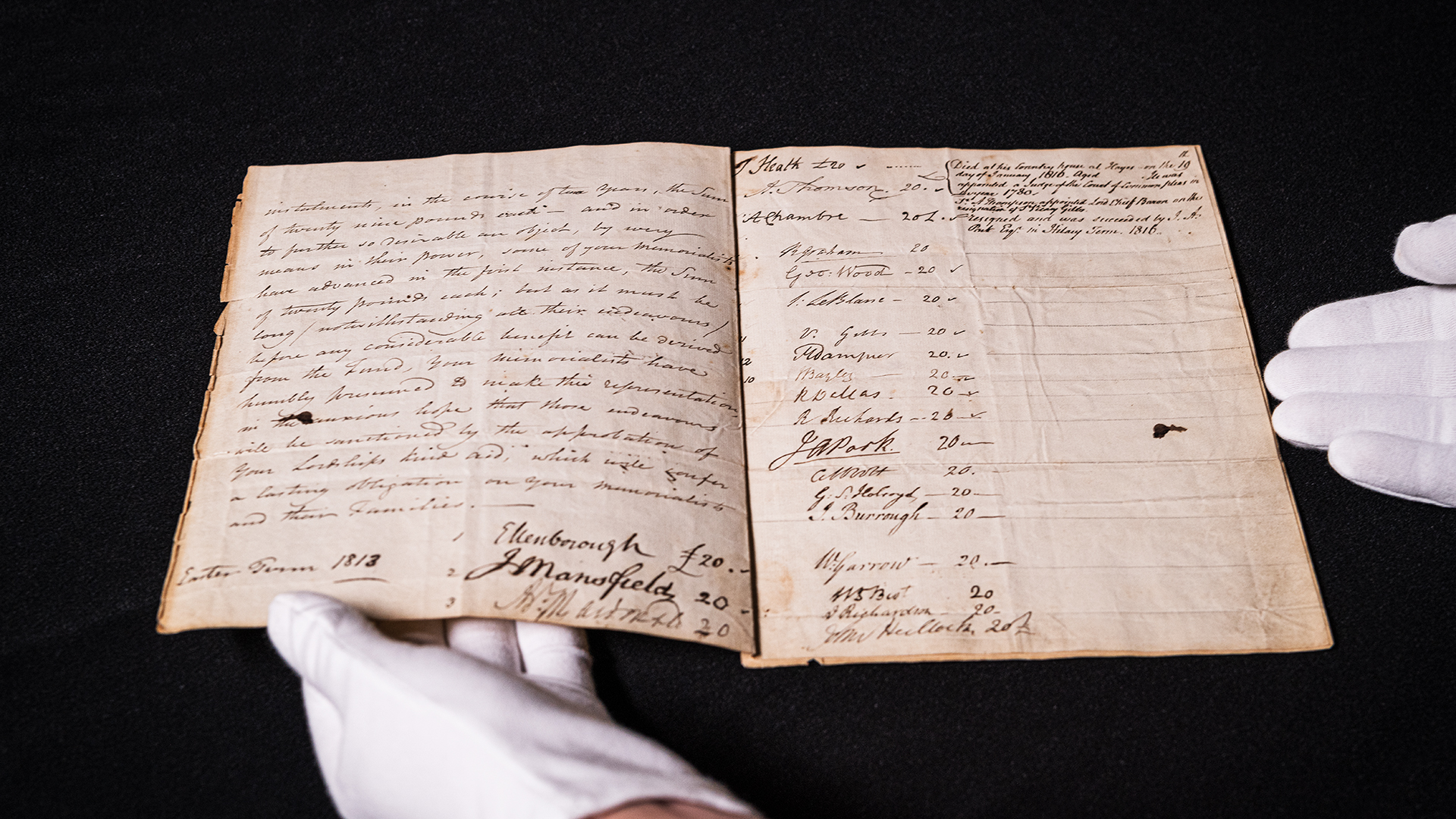 Two rare legal documents, dating back to 1813 and 1873, were recently digitised at the Christchurch NZMS office. Both relate to High Court matters in 19th Century England and provide a fascinating glimpse into the manner of legal proceedings at that time.

The 1813 document is an open letter from the Judges’ Clerks to Lord Ellenborough, Lord Chief Justice Mansfield, and several High Court Judges. It petitions for the establishment of a fund to provide financial assistance to the Judges’ Clerks’ families during times of hardship. The document is signed by 35 judges and states the amount of money they were prepared to donate – most gave twenty pounds.


The 1873 document has particularly unique historic value due to the addition of Queen Victoria’s signature. The front page is embossed with the Royal Seal and at the very top a cursive “Victoria R.” can be read. The “R” after her name refers to “Regina” which is the Latin word for queen. Reigning for 64 years (1837-1901), Queen Victoria’s signature often appears on official documents and letters of state during this era.

The documents were supplied by Tom Burrows, who inherited them from the estate of his great-grandfather, Edward Holton — an assistant to a High Court Judge, the Honourable George Denman in London, England. In 1893, newly widowed, Edward decided to immigrate to New Zealand, bringing several legal books and documents with him. He kept in contact with his colleagues in England and was even mailed the 1873 letter.

Tom explains, “my great grandfather came to New Zealand with two teenage sons and a daughter (my grandmother). I suppose he wanted to give his sons a taste of colonial life. He was fortunate to draw a farm in the ballot when Cheviot Hills was cut up by the government. Edward’s older son didn’t like farming and returned to England. This meant the younger son eventually took over the farm where he remained a bachelor until he married a widow with five children!” When the Holton family farm in Cheviot was eventually sold, all the family’s possessions were packed away and stored with Tom’s various step-cousins. It was eventually decided that the possessions should be returned to Tom, who is the only direct descendant of Edward.

After deciphering the complex cursive, it appears the purpose of the 1873 letter was to grant lawyer William Digby Seymour (of Payne and Nelson Solicitors) a licence to plead on behalf of Henry Vivian Noyal on a charge of Felony. It is not clear exactly what the charge of felony relates to, but traditionally it is considered a very serious crime. In the Victorian era, someone convicted of felony would lose their wealth, status, and in some instances receive capital punishment. Unfortunately, there does not seem to be any available record pertaining to Noyal’s fate.

Handling them with great care, our digitisation technicians captured the fragile letters on a Phase One medium-format camera that boasts 100 megapixels. This meant we could capture the documents in superb detail and create a true-to-life digital replica.

Now that they have been digitised Tom plans to return the documents to the UK to be archived. He’s been corresponding with Lord Judge, a former Lord Chief Justice, who is establishing an archive of old legal papers and is interested in adding Tom’s letters to the collection.

NZMS are passionate about preserving and protecting cultural heritage material; contact our team to digitise your collections.