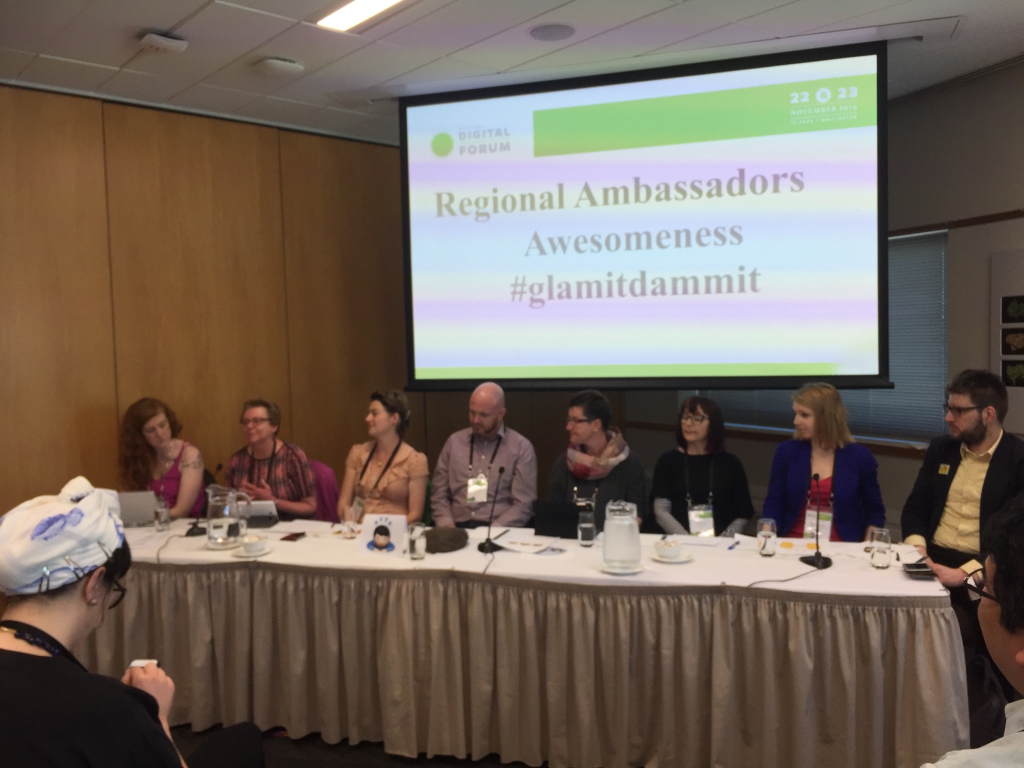 We had a number of staff attending the National Digital Forum in Wellington recently.  NZMS has been a strong proponent and contributor to the National Digital Forum Conference since its inception in 2002.  The approach of the NDF mirrored back then much of what Andy Fenton had aspired to in business – learning, sharing knowledge and collaboration around cultural heritage.  Heady days for what some might consider BAU now.
We always send a few staff but this year we managed to get quite a few people attending who had never been before.   We have collected some of their thoughts, along with some contributions from Andy on one of his favourite topics… please read on for some of their impressions and insights.
Gavin Mitchell, NZMS General Manager and vastly experienced ICT protagonist noted
“As a first timer I was impressed by the range and ingenuity of the many projects described at NDF.  I was pleased to see a strong emphasis on contextualising digital content through narrative/story telling techniques.”
Gavin also noted:
“strong support for skill and career development within the sector”
which he has always promoted in the commercial sector too.
Alison Barnett, NZMS’ Northern Regional Manager based in Auckland, was also a first timer to NDF although she regularly attends the regional fora north of Taupo.  She lists some of her highlights from the conference:-
·        “Microsoft’s Head Software Engineer Dave Brown presented on the importance of data visualisation and the benefits of 3-D pattern recognition in creating meaning from data sets.  In one example, New Zealand’s earthquake activity was modelled using Microsoft’s Power Map tool.  Incorporating data relating to earthquake depth, time and frequency, severity and location, the map of New Zealand initially showed earthquake hot spots but when rotated the audience could view the map from below and plot points were seen to be tracking the fault line along the subduction zone between the Pacific and Australian tectonic plates.  His demonstration of the Microsoft HoloLens was impressive as we watched him interacting with the 3-D hologram of the earth hovering in front of him.”
The talk is now available on NDF’s YouTube channel (Keynote: Dave Brown ) and well worth watching.
·        Takerei Norton manages the Ngāi Tahu Cultural Mapping Project and he described their goal of using GIS technology to map every place in the South Island onto an interactive google maps interface.  This project has seen groups of Ngāi Tahu hiking all over the country to locate exact geographic points.  The outcome is to be a website that will show the Ngāi Tahu history of the land.
·        Geoff Hinchcliffe from the Australian National University, creates art work and interactive designs using what he describes as a speculative design process.  His Gravitron website provides examples of his playful approach.
Adrienne Martyn, NZMS Digital Imaging Technician based at our Heritage Materials Imaging Facility in the Archives NZ building in Wellington Government Quarter, attended the NDF satellite event – the New Zealand Photographers of Cultural Collections Forum, and the topic for the forum was “Future ways of working”.  Adrienne commented:
“The forum was beneficial, informative and an enjoyable experience where everyone shared their ideas, problem solving methodologies in a non-competitive and sharing way”.

We were immensely proud of Dunedin Public Libraries recognition for their hard work embracing communities.  Scattered seeds won the community award at NDFNZ; to be clear the award they won was not about their presentation at NDF, it was a vote from the NDF membership about GLAM Community building described thus:
“Community: who’s building the networks and communities that underpin our work?”
The day after Conference we also conducted our first Recollect User Group meeting onsite at our HQ in Grenada North … this gave us a great chance to share our development roadmap as well as seek input from users; also to offer Administrator training tips & tricks.  We will run these nationwide in 2017 and in Australia where we have over 30 platforms now running.
Andy is a massive fan of the outreach and collaboration aspects of the NDF fraternity and the Board’s good work here.  He personally organised a ‘GLAMster’ Meetup event immediately following the conference close which gave non-conference attendees the chance to join delegates at a popular waterfront hostelry and share in the knowledge and themes raised at Conference.  That group can be found here if you are interested in joining.
Regarding outreach across NZ, regional ambassadors formed a panel to report on their goings on, and to field questions about future endeavours.  It’s fair to say they’re doing some fine work connecting GLAM Orgs and folk around themes or events, but we’d like to see them join up with other sector groups such as LIANZA, Museums Aotearoa, NSTP and ARANZ.
NDF 2016 covered the usual plethora of fantastic collaborative and innovative projects we have come to expect and the speaker programme was very strong.  One could synthesise the presentations by saying it was about how organisations and communities tell their stories.  It really is a highlight of the cultural sector calendar and we recommend you book in to attend next year –and we recommend you make time to attend the satellite workshops and gatherings on the day either side, and that includes coming to visit us!
In closing we think it appropriate to cite NDF outgoing Chair Matthew Oliver’s closing address – where he succinctly summed some of the reasons we do what we do in a world so troubled by humanitarian crises mostly man-made (but we note through natural disasters as well) or up-ended (Brexit, Trump) and asked us to share our stories of the past so we can contribute to making a better future:
“…We need to see our role as central to working with communities, with people, and doing all we can to halt and repair the sort of social breakdown we’re witnessing…”