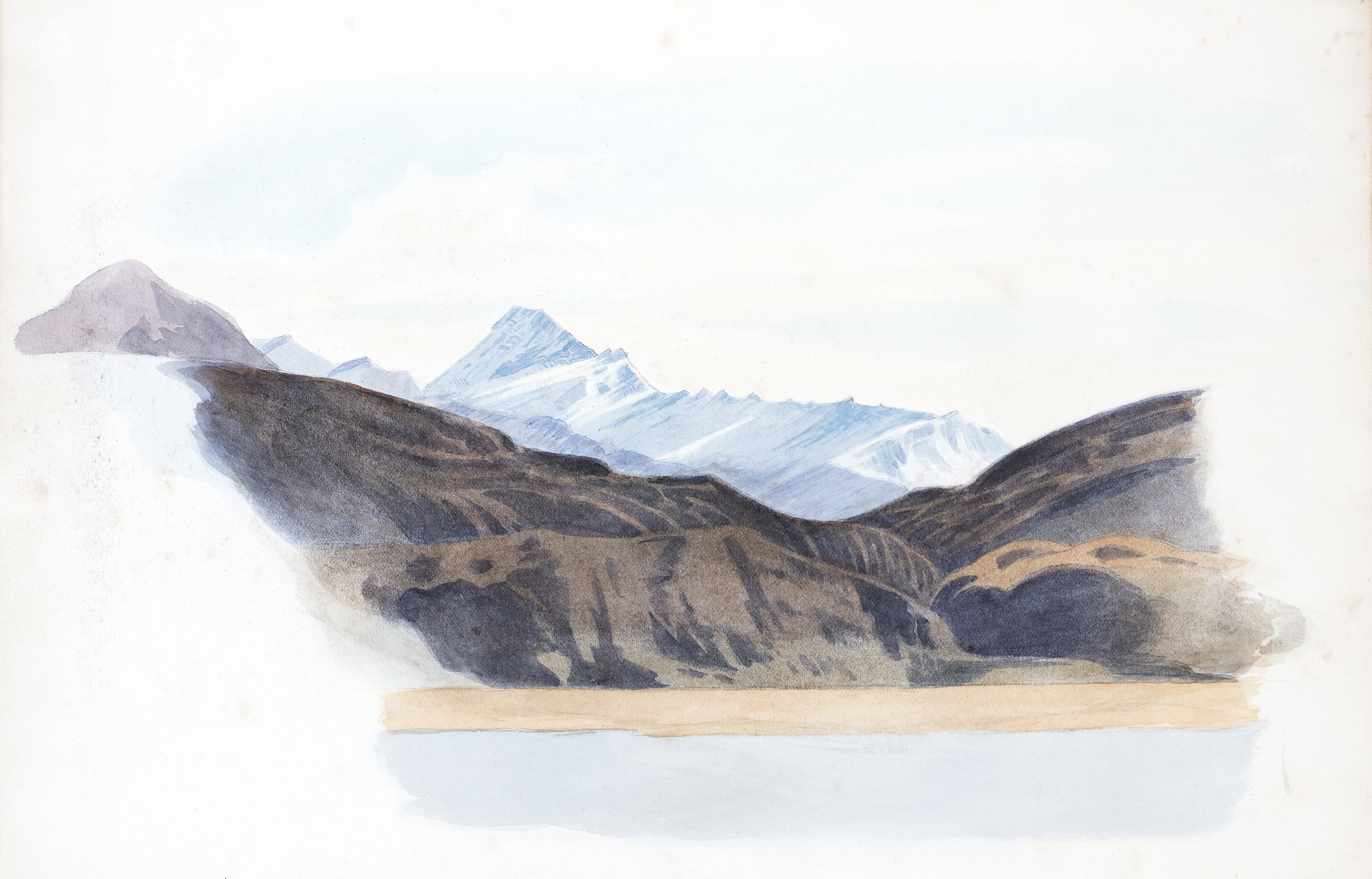 Image above: 1949.42.1-9a: John Buchanan’s watercolour painting of the view of Mount Aspiring. Image courtesy of Toitū Otago Settlers Museum.

John Buchanan was the first locally based scientific illustrator in Aotearoa New Zealand, and joined many explorations across the country from 1862-1885, collecting and illustrating distinctive examples of our local flora and fauna. Buchanan prepared hundreds of illustrations for a wide range of scientific publications, and he also wrote some of his own papers on our unique flora. His major achievements include undertaking fieldwork and technical projects for James Hector and illustrating the first eighteen volumes of the Transactions and Proceedings of the Royal Society of New Zealand.

While numerous papers and books have been published relating to Buchanan’s work, his private sketchbooks, filled with drawings and inscriptions, offer us a rare insight into the beliefs and viewpoints of one of the era’s best-regarded botanists and artists.

Toitū Otago Settlers Museum holds a collection of three sketchbooks owned by Buchanan. They are artworks in and of themselves: filled with beautiful watercolour landscapes revealing valleys, lagoons, and rough seas, sketches of a huge variety of plants and insects, striking photographs of places and people, and cartoons from local newspapers. In April of this year, NZMS were fortunate to be given the opportunity to digitise the sketchbooks for Toitū with the intention of ensuring their preservation and to minimise the necessity of future handling.

John Buchanan was born at Levenside in Dunbartonshire, Scotland on 13 October 1819. The eldest of four children, he was educated at the local parish school and later studied at the mechanics’ institute, becoming an apprentice pattern designer at a calico printworks. He eventually moved to Glasgow where he worked as a foreman in the drawing shop of Henry Monteith and Company. However, his greatest passion was in the field of botany, and he would spend his spare time enthusiastically collecting plants and creating illustrations.

During this time, New Zealand was considered by those overseas as a largely unexplored region with expansive beautiful landscapes, holding a wealth of undescribed species and plants — to an enterprising botanist like Buchanan, a move to New Zealand must have seemed like an opportunity too good to pass up.

Buchanan emigrated to New Zealand in 1851, travelling on the barque Columbus, arriving in Port Chalmers seven months later in 1852. Once settled, he bought and farmed a 10-acre section in the North East Valley near Dunedin. Between 1856 and 1859 he was employed as an assistant to Alexander Garvie, and helped with the provincial reconnaissance surveys of Otago. Interestingly, he was actually the first to find gold at the Tuapeka and Clutha rivers, pre-dating Gabriel Read’s discovery in 1861, but Buchanan never gained recognition.

James Hector enlisted Buchanan as a botanist and draughtsman for a number of expeditions in 1863 that explored the Otago region by both land and sea. These trips included Hector’s major expedition up the Matukituki valley to find an accessible route to the West Coast. During this journey, Buchanan was able to investigate the upper reaches of the Matukituki River and produced what was likely one of the first vegetation maps to be created in New Zealand.

By the end of 1864, Buchanan had generated some of his finest work alongside the scientific guidance of Hector, creating botanical drawings, maps, and panoramic watercolours of the western lakes and sounds. Milford Sound looking north-west from Freshwater Basin (from the Hocken Collections) is the best known of this series and its preliminary pencil studies can be found in the sketchbooks held by Toitū.

In the History of Otago, Dr Alexander Hare McLintock talks about Buchanan and his painting Milford Sound Looking North-west from Freshwater Basin: “[he had a] concentration on bare essentials, portrayed in an austere harmony of brown, grey, green, and blue [which] resulted in a work of superlative merit. Though it possesses qualities which make it one of the few great landscape paintings the Otago century has produced, this watercolour stands as aloof in its class as it does in appeal. Nothing since has ever quite approached it and Buchanan with this triumph reached the heights, for in his remaining work his limitations are more apparent than is his talent… In the history of provincial art Buchanan remains as detached a figure as the lone mountains he delineated in so unique a fashion.”

Hector was appointed as the Director for the newly constituted Geological Survey and Colonial Museum in Wellington in 1865, and he secured appointments for all his Dunedin staff, including Buchanan, in their corresponding roles. In his new role, Buchanan continued to travel the country, taking trips to study the unique botany and geology of New Zealand — all of which he meticulously documented in his many field-books.

Over his lifetime Buchanan published 36 scientific papers and a three-volume illustrated folio work called The Indigenous Grasses of New Zealand (1878, 1879, 1880). His papers frequently described new species of native plants as well as dealing with plants from certain locations, e.g., the floras of Kawau Island, Campbell Island, and the larger Wellington region.

Buchanan’s other notable achievements include becoming a foundation member of the New Zealand Institute, producing lithograph illustrations for the Transactions and Proceedings of the New Zealand Institute from 1867 until 1885, his nomination as a fellow of the Linnean Society in 1876, and on his retirement he was made a life member of the Wellington Philosophical Society.

At the age of 66, after 23 years of Government service, Buchanan retired to his home in North East Valley, Dunedin where he lived until his death in October 1898.

The sketchbooks were donated to Toitū in 1949 by W.B. Anderson, a Dunedin man who was Buchanan’s friend. The Otago Daily Times (Issue 27086, 21 May 1949, Page 2) reported on this donation, saying that the sketchbooks, “possess considerable merit [… and] present proof of Buchanan’s industry in the field [of botany].”

Buchanan’s sketchbooks are historically important because they uncover early visuals of New Zealand, and in particular the Otago region — the botanical studies and drawings of the scenery and landscape of that time could allow researchers to assess how the area’s vegetation and environment have changed since the 19th century.

The first sketchbook is made of red cloth and is hardbound with the title “Album” printed on the cover alongside a line picture of a group of children. The inside cover features a carte de visite (a small-format photograph affixed to card stock) produced by photographer John McGregor, showing Buchanan sitting on a chair looking at a ghostly figure of himself. The photograph was created using the double exposure method and it was common photographic motif during the 19th century, often deemed spirit photography.

The remaining 17 leaves of the album contain watercolour paintings, photographs from expeditions, and many sketches of plants and landscapes.

The second sketchbook is also made from red cloth over boards but in contrast it has gilt lettering on the front with the title “New Zealand Ferns”. It is made up of 72 leaves and contains drawings, photographs, newspaper/magazine cuttings, watercolours, prints, and mounted cards. Of note are several mock-ups for lithographic plates that were published in Transactions and Proceedings of the New Zealand Institute, Vol. XIV — e.g., scientific drawings of Notothlaspi notabilis, Achycladon novae-zealandia, and Pachycladon glabra.

Like sketchbook two, this album also has gilt lettering with the title “New Zealand Ferns”, however it is made from blue cloth over boards. It contains 72 leaves featuring drawings, watercolours, newspaper/magazine cuttings, cards, and photographs.

One page features a large watercolour titled View of Dusky Bay from the Hill above Cascade Cove, which folds out from the album.

Alongside Buchanan’s own drawings and watercolours, the sketchbooks contain a large number of cartoons taken from newspaper clippings, especially the third album (1949.42.3). Buchanan probably collected them because he found them entertaining and interesting in the context of his own work, and kept them in a scrapbook-like manner. The cartoons are a representation of the social and political climate of the time, and often portray day-to-day scenarios with a short joke or punchline.

NZMS digitised the sketchbooks to a high resolution of 600ppi so that even the smallest drawings could be enlarged and examined. The pages were captured as single page spreads to ensure the delicate albums would not need to be opened flat for capture, and that any details close to the spine were not lost. The images were delivered both as single pages and as multiple cropped versions of items on each page. This meant the images could be viewed by themselves but also in the context of the other items Buchanan had grouped them with on a page.

Preservation was the main reason for digitising the sketchbooks: it ensures there is a digital “back-up” in case the originals are damaged through unforeseen circumstances, and it also means the physical items can be stored away and rarely handled while still allowing public access to the information they hold.

The contents of these albums are sought after by researchers for a variety of reasons, and Toitū will make the digitised images available to those who enquire.

History in the Raw

The digital preservation of John Buchanan’s sketchbooks is important because they show the depth of his academic and artistic process. Sketchbooks are less structured than finished work and often reveal the owner’s thought process; they are a place to try new mediums, test theories, and keep a visual record of what is inspiring. Buchanan’s sketchbooks contain drawings that he likely created out in the field that have later acted as memory prompts on his return to produce his finished artworks.

The fragility of these sketchbooks means that they are unable to be handled and put on public display. Their digitisation will increase access and engagement with these important items from New Zealand’s cultural heritage, and through this we can gather new insights about John Buchanan and his commitment to New Zealand’s scientific community.