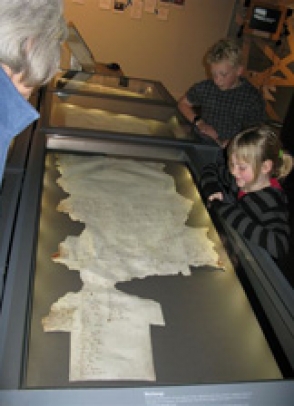 The Treaty 2 U touring exhibition was jointly curated by Te Papa, Archives New Zealand and the National Library of New Zealand. It told the story of New Zealand’s founding document: the Treaty of Waitangi, from the back of a truck!
The centrepiece of the exhibition was the facsimile copy of the Treaty, which actually consists of nine documents, two on parchment and seven on paper. NZMS scanned the Treaty sheets from transparencies but the digital files were then colour matched to the original manuscripts at Archives New Zealand. Andy, our Managing Director is one of the few people to see the Treaty of Waitangi out of its protective case.
We printed the sheets and the pristine reproductions were then aged and distressed by Daniel Reeve to match their current condition.