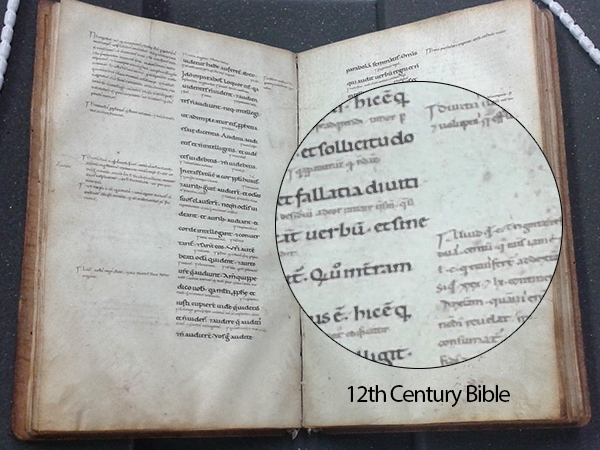 The Alexander Turnbull Library collections occupy about 50kms of shelving in temperature and humidity controlled stores. They may be stored behind closed doors but they remain accessible to all. Preserving these collections for future generations while also making them accessible to today’s researchers is the challenging brief given to the Collection Care Team

Our tour group had a fascinating hour with the collections care team – they showcased a variety of items from there collection and discussed the different requirements to ensure these collections are available to all.

We started with a Gospel of St Matthew Bible dated from c1125-1175. NZMS staff are lucky enough to see and handle a wide range of unique manuscripts but this was over and above our normal ‘better work stories’.  Peter described in detail the method of treating the animal skin to get the final fine vellum parchment, showing in parts where the vellum sensitivity to moisture often makes the page want to reshape to its original form. This particular manuscript was bound with a Romanesque binding which is one the strongest bindings known and had beautifully crafted ¼ sawn oak boards used for the covers.  There is a small sense of awe as you turn the pages of a 700 year old book! 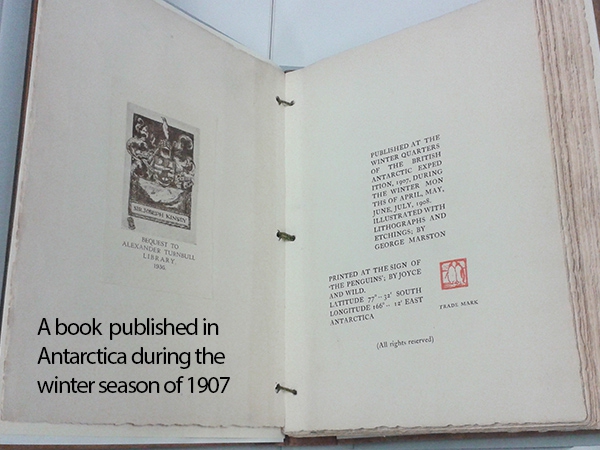 The highlight of the items on display were the 2 copies of the Aurora Australis, printed and published by Joyce and Wild: two members from the 1907-1909 Nimrod Expedition led by Ernest Shackleton. The idea behind printing, publishing and binding a book in Antarctica was to help combat ‘polar ennui’ or ‘boredom’.  Shackleton’s two printers had 3 weeks of  training before leaving for the ice.  ATL hold the Juliand Soup and Beans editions in their collection and explained that the binding and covers (created by cannibalising the wood from the food crates taken on the expedition) has meant the books’ fragility is high risk -meaning  these were the only items on the tour we were unable to touch. 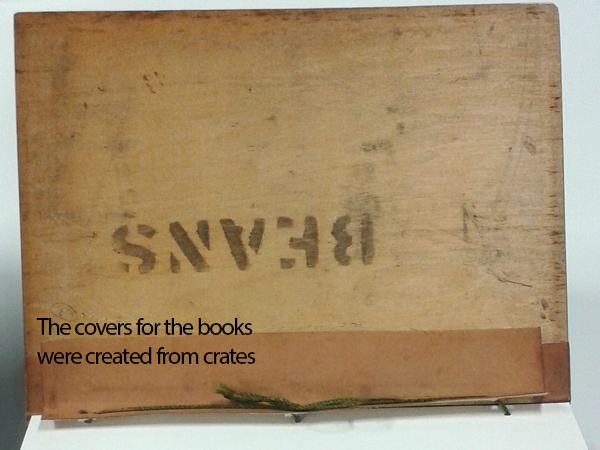 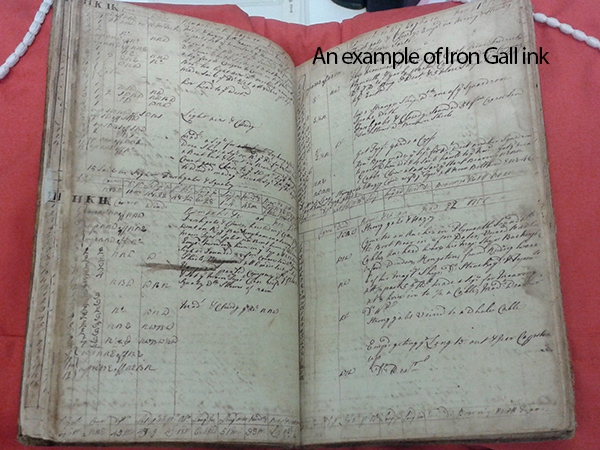 We explored the well-known issue of Iron Gall ink with examples on display from the ‘First Mate’ on the Ship “Eagle” –  one James Cook.  You can clearly see the ink causing corrosion as it continues to etch into the paper.  This creates potential issues with legibility and of course the ink may eventually cause irreparable damage to the page. 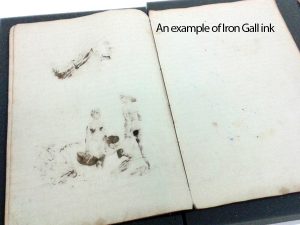 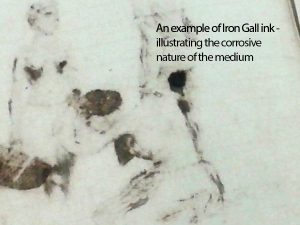 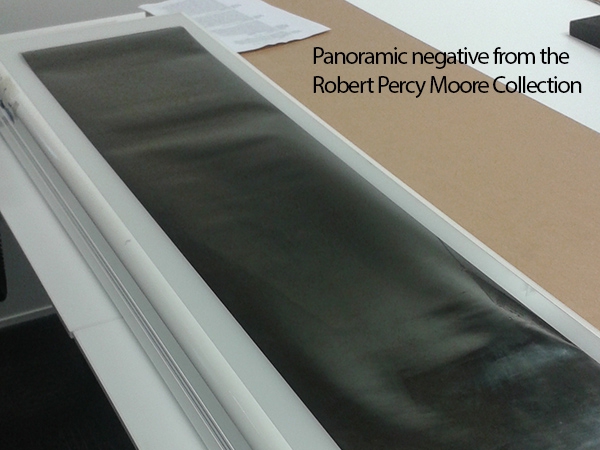 The tour wasn’t limited to manuscripts; we also had a look at a panoramic negative from the Robert Percy Moore Collection. These negatives were captured using a rotating Cirkut Camera and while stunning they are also a collective problem for the ATL team due to the cellulose nitrate film base.  This film is well known for its tendency to self-combust when unstable!  To avoid auto-ignition these films require stable storage at 2 degrees Celsius  with 30% relative humidity. We were told the ATL insurers require the exact location of all nitrate films in the building to be documented – I think I would too!
Acetate film was introduced from the 1930’s as a replacement to Nitrate but unfortunately over time it was discovered the Acetate began to breakdown and release acetic acid commonly known as ‘Vinegar Syndrome’. ATL  are currently looking at different solutions to conserve and digitise their extensive Acetate collections, with a range of actions needed depending on the state of the negatives.  The process may be as simple as digitising directly from the acetate negative, or it may involve intermediate steps, for example reformatting onto polyester first, or in the case of advance deterioration, re-floating the emulsion to smooth out the image as best they can.  This was very familiar territory for NZMS: we have worked with many clients to assess, reformat and/or digitise their acetate collections. 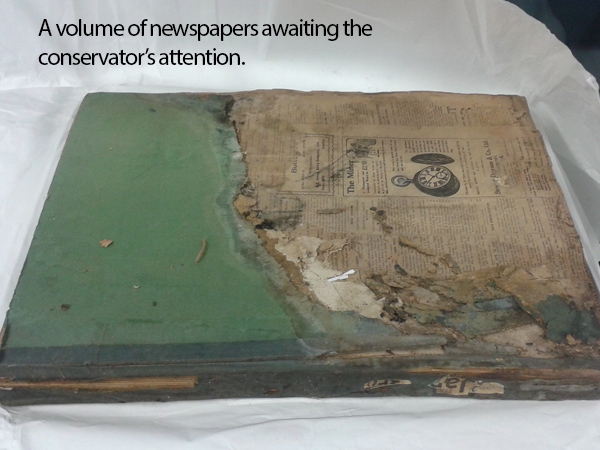 Newspapers represent the bulk of the ATL collection and are in high demand by researchers and newspapers were the focus of the final part of the tour. Have you ever wondered why newspapers from the last 100 years haven’t lasted as well as the previous centuries?  Peter explained that the answer is in the different types of newsprint created over the ages – in short: rag vs wood pulp. By the mid 1850’s the paper industry was moving from the traditional acid free cotton and linen fibres onto the cheaper to make wood pulp which has a high acid content. This essentially means most papers from the mid to late 19thC have a tendency to brown and become brittle and unstable over time.
In New Zealand NZMS has preserved on microfilm over 10 million pages of newspapers and we have noticed the pulping/lignin acid process came in typically in the 1890’s – so many of our newspapers up until then are in good condition (except for the pages near the cardboard covers which were often added or replaced later in their lives).

The resounding message from the Collection Team was ‘storage is our first defence’.  ATL have extensive storage facilities with a variety of temperatures and relative humidity environments to suit their vast collections. They custom design packaging solutions in the form of acid free boxes and sleeves to house individual items to ensure these rare and often unique collections are available to view for some time yet.
But while that mitigates decay it doesn’t solve the risk of loss or damage, accidental or otherwise – for that your options include microfilming or digitisation to produce a facsimile.  We all want the important cultural heritage we have today to be available for our grandkids in the best format possible.