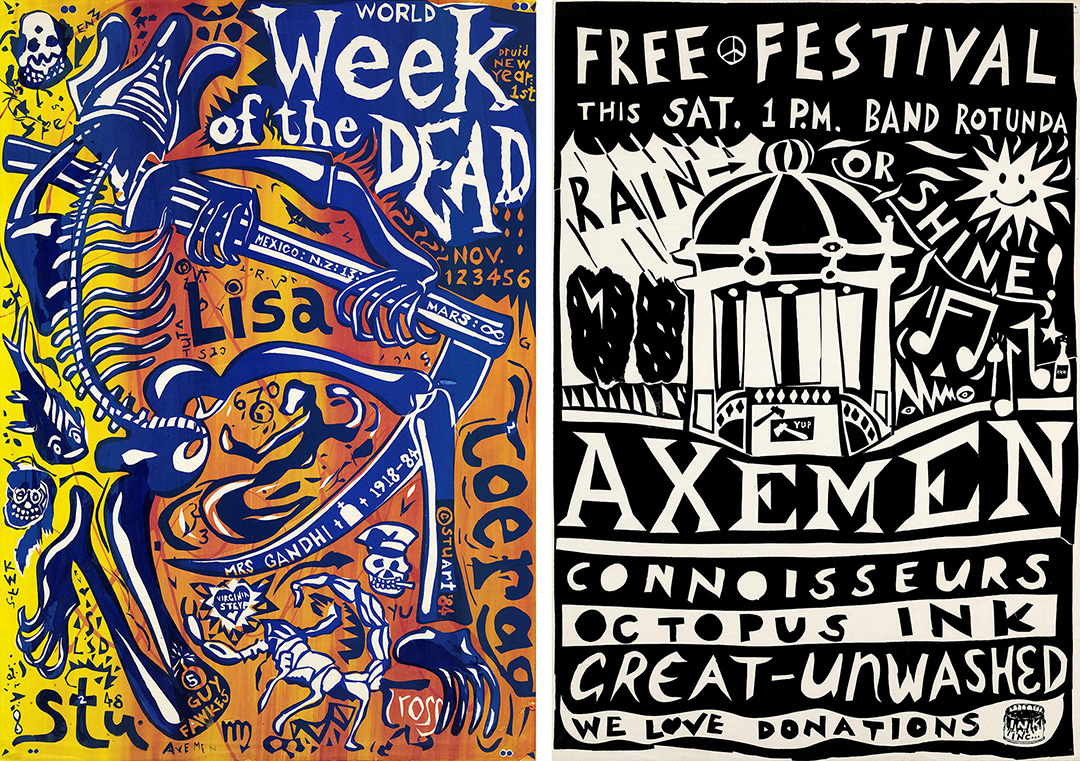 Independent music label Flying Nun Records was founded in Ōtautahi Christchurch and celebrates its fortieth anniversary this year. To recognise this important date, Christchurch Art Gallery is hosting an exhibition called Hellzapoppin’! The Art of Flying Nun, curated by Peter Vangioni. The exhibition showcases rare original artwork, design, film, record covers, posters and photography featuring Flying Nun’s most influential bands, and is sure to be a worthy tribute to a significant part of New Zealand’s music history — celebrating a period that exuded an effortlessly cool post-punk attitude.

Stuart Page (a photographer, designer, filmmaker, and drummer), who created some of the posters featured in Hellzapoppin’!, explains how this chapter of New Zealand music deeply inspired a whole range of musicians and artists:

“The posters have all sorts of emotions mixed up in them for me. The early to mid ’80s was an incredible time to be making art and music in Christchurch, New Zealand. It really seemed to be the epicentre of something very special; there was so much creativity that was unparalleled anywhere else in the world. It was much bigger and more diverse than what the world had been led to believe once that ‘Dunedin Sound’ cliché had been let out of the bag.”

NZMS were lucky enough to be asked to digitise some of Stuart’s posters so they could be featured in Hellzapoppin’!. Our technicians digitised the posters, which were approximately A2 in size, with a Phase One medium format camera to achieve the highest resolution possible and ensure a quality print could be produced. One screen-printed poster, titled ‘AXEMEN at England St Hall’, is particularly striking, and Stuart explained that a lot of what was happening in his life at the time, and his artistic influences as a result, can be seen within it. The poster advertises a Sunday afternoon concert featuring Stuart’s group AXEMEN, as well as Scorched Earth Policy, All Fall Down, Gillmen and McGoohans. It is based on a colour transparency photograph that Stuart took of the AXEMEN inside a bedroom of (the affectionately named) Peterborough St Studios.

“I had recently returned from a mind-blowing six-month journey around the USA, culminating in New York City which was going through a graffiti, break-dance, and rap revolution at that time — I found all of that very exciting, so it greatly affected what I did for many years after.

“I had also discovered that I was born on the Mexican Day of the Dead (2nd November) and that led me down a path of investigation into what all that was about, including the mushrooms and cacti associated with various rituals in the deserts and mountains of Central and South America. There are many ancient symbols embedded in the design, which was screen-printed in four colour process inks (cyan, magenta, yellow & black) with perhaps a small amount of fluorescent ink added to some colours to increase the psychedelic intensity.

“My girlfriend’s father worked at the University computer department and on a visit there once I discovered boxes and boxes of large dot-matrix computer print paper left out the back for recycling… so I’d back up my Morris Minor and load it up with a few boxes which became the print-stock for this and several other posters from my inner city INK INC. studio.”

Hellzapoppin’! runs from the 21st of August until the 28th of November 2021 at Christchurch Art Gallery — make sure you head along to see Stuart’s fantastic posters alongside the artworks of many other artists who created the imagery epitomising the glory days of Flying Nun.