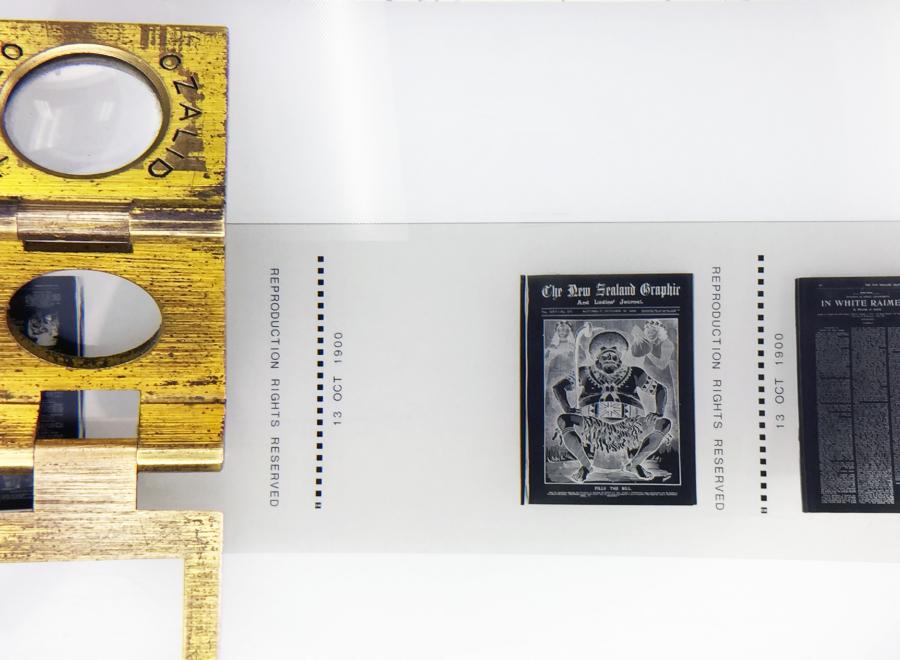 Recent publicity about the discovery of Katherine Mansfield’s previously unknown first work “His Little Friend” in the 13 October 1900 issue of New Zealand Graphic and Ladies Journal caused excitement at NZMS.
Managing Director Andy Fenton recalled microfilming the journal sometime in the early 1990s and a little research by the NZMS Operations Team confirmed that it had been done on behalf of the Auckland Institute and Museum Library (now the Auckland Museum Library) in 1993 and NZMS still holds a copy. Based on NZMS records, the Auckland Museum Library and Auckland University Library do too.
Historian Redmer Yska discovered “His Little Friend” and its significance while researching Mansfield’s early life for his new book A Strange Beautiful Excitement: Katherine Mansfield’s Wellington, (Otago University Press, 2017). It seems the story had never been officially connected with Katherine Mansfield, presumably because it was published under her given name of Kathleen M. Beauchamp when she was just 11 years old.
Yska’s book considers how “His Little Friend” prefigures some of the elements of Mansfield’s “The Garden Party”, published 22 years later, and he also examines how growing up in socially prominent family in Karori, Wellington, influenced her oeuvre.
Although the microfilm version of the New Zealand Graphic and Ladies Journal was not used in Yska’s research, journal and newspaper microfilms remain an important resource for researchers and contribute to a wider discussion about the importance of today’s digitised records. Newspapers offer researchers vital context when trying to understand the socio-political and environmental conditions that shape an author’s style, perspective and fictional settings. From the Hansard Parliamentary Debates to early New Zealand newspapers and other written records of significant cultural heritage, digitised records, particularly newspapers, offer a supplementary historic record and serve to frame works of fiction written or set in the same period.
NZMS has worked with National Library for over 14 years and it is National Library that is responsible for the invaluable Papers Past platform which provides access to many pre-1920’s New Zealand newspapers. However, by Andy’s estimation, only 50% of newspaper content produced between 1840 and 1920 has been digitised.  Indeed, searching Papers Past for issues of the New Zealand Graphic and Ladies Journal , and more particularly the ‘Children’s Page’,  surfaces six pages  all dating 1900 – but not the now famous 13 October 1900 page.
The discovery of Katherine Mansfield’s very first and previously unknown publication serves to emphasise the importance of our historical newspapers and why we need to make a concerted effort to microfilm and also digitise these hugely significant documents.  Many papers from this period reside on microfilm, preserved but for the most part inaccessible to all but the most dogged researchers.  Meanwhile, the loss of our papers is the loss of a valuable resource for understanding who we were and how we became the New Zealand of today.