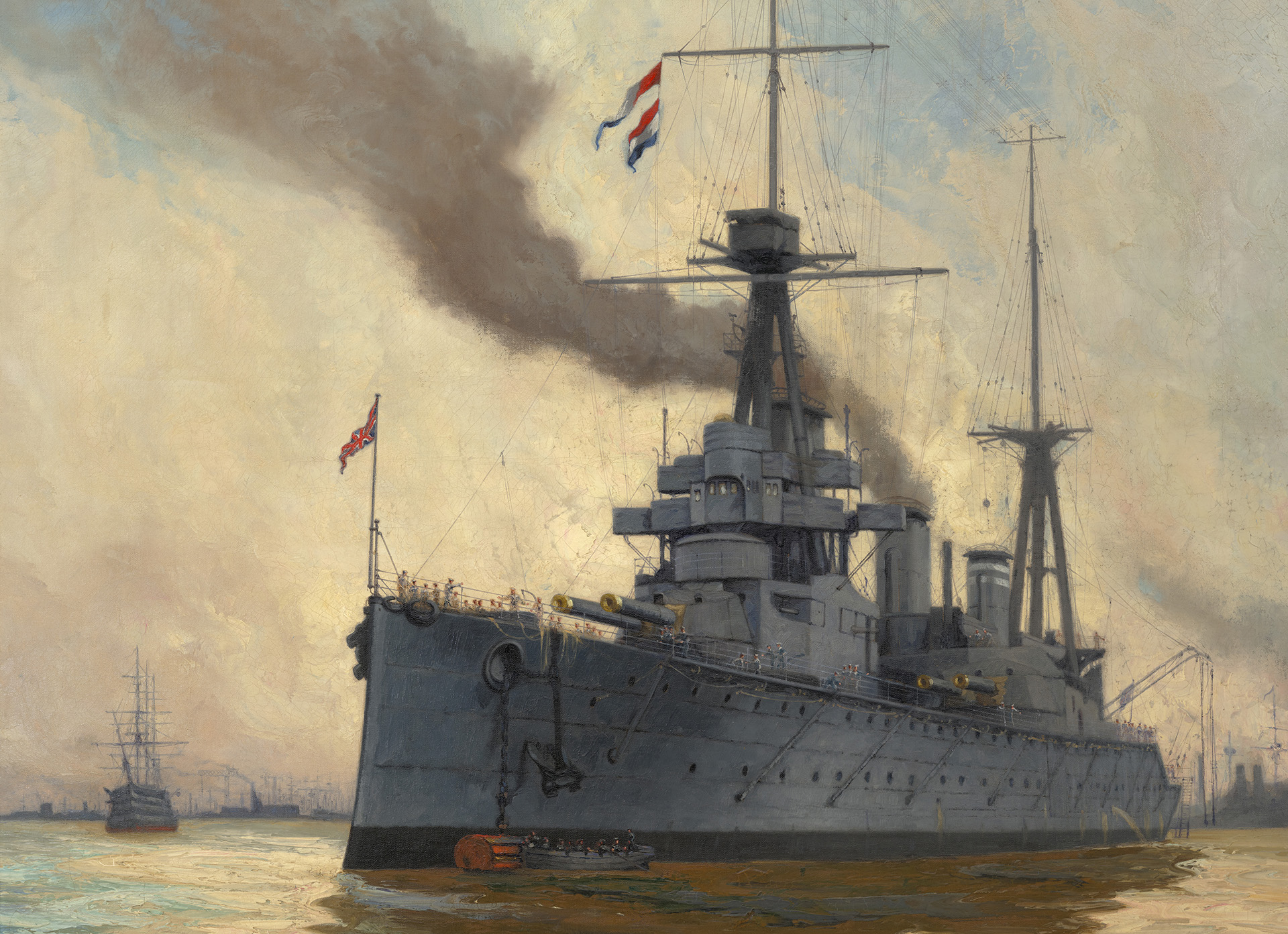 At the mouth of the Waitematā Harbour in Devonport lies Torpedo Bay — a site of remarkable historical significance. Since 1880, it has been continuously occupied by New Zealand military forces, once even being the site of a torpedo station that made up Auckland’s coastal defence network. While it is still the most substantial and intact 19th Century mining bases to survive in New Zealand, it is also home to The National Museum of the Royal New Zealand Navy. Our Auckland NZMS team recently worked on site to digitise six artworks hanging in the museum’s AD Boyle Room.

A Room Brimming with History

The AD Boyle Room was built in 1898 into the side of North Head cliff, originally functioning as a mine test room, it now serves as the museum’s replica for a navy ship’s wardroom. The room has an interesting and tumultuous history; in 1917 it was even used to incarcerate the infamous Captain Felix Von Luckner prior to his transfer to Motuihe Island.

The AD Boyle Room contains some of the museum’s most valuable WWI objects; accommodating various paintings, photographs, objects, and pieces of furniture from HMS New Zealand. The history belonging to this ship is important because it represents New Zealand’s most substantial contribution to the war at sea by fighting in three major battles: Heligoland Bight, Dogger Bank and Jutland.

The museum sought out NZMS to digitise some of the artwork in the AD Boyle Room for the purposes of preservation. The artwork needed to be taken from display and put into safe storage for scheduled resting from light, temperature, and humidity — digitisation allows for a facsimile to be created that will hang in the original artwork’s place. As a historic building, humidity is difficult to control in the AD Boyle Room, which means the objects need to be routinely removed to protect them from environmental damage.

The Photographic Archivist at the Navy Museum, Rachael Stallard, explains, “due to the historical significance of our WWI collection it was important for these works to be rested. We hope to find the balance between visitor experience and collection care so that these works can inspire for many generations to come.”

Due to the size of the items the best digitisation approach was for our team to work on-site, using our own lighting, rigging, camera, and camera support to capture the items. This allowed us to work collaboratively with the staff at the Navy Museum to ensure the items were protected and to limit any handling risks.

Our team captured the artwork with a Phase One 100 megapixel camera, specialist equipment that can best reproduce fine details including paint texture and brush strokes. The artwork was photographed at a 1:1 scale, which meant the printed copies would be nearly indistinguishable from the originals. The artworks ranged from oil paintings to large panoramic photographs housed in wooden frames. Assisted by Navy Museum staff, our technicians removed most of the artwork from the walls and securely mounted them onto our custom artwork support for optimal capture conditions.

Due to the shiny quality of the oil paint or photograph’s surface, our technicians cross-polarised the camera and lights. This resulted in images with no specular highlights, reflections, silvering, or other distractions.

However, one artwork had a gold frame which would have turned black under the polarising filter. To mitigate this we shot the frame again without the polarisers and recreated the entire image in Photoshop as a composite by cropping out the painting and digitally inserting it into the unpolarised frame.

Each artwork was also captured alongside a colour target to guarantee a high level of colour accuracy in the final digitised image.

The oil painting of HMS New Zealand by Gerald Burn was one of the largest we captured at the Navy Museum — reaching 1.3 x 1.1 meters. It was commissioned and presented to HMS New Zealand in 1913. Subsequently, it was hung in London’s Naval Headquarters for many years before being returned to New Zealand in 1996.

Our team captured this artwork in two images, later stitching them together in Photoshop, so that a high resolution could be maintained. This item was particularly challenging to capture due to its size and because it could not be removed from the wall. There was also very little space between the top of the painting and the ceiling, which meant a different lighting arrangement had to be setup.

One black and white photograph we digitised featured HMS New Zealand berthing in downtown Auckland in 1913. The photograph was fragile, having suffered some damage in the past; showing the signs of its age along with a few tears. Our team took extreme care while handling it to prevent any further damage. The photograph’s frame was also distorted in some areas which made levelling the item to the camera more challenging.

NZMS are the leaders of cultural heritage digitisation in New Zealand. Our team are trained to manage digitisation projects and use specialist equipment, such as a Phase One camera, to generate stunning results. We are committed to digitally preserving our Nation’s important taonga. Contact us today to see how we can help you develop a digitisation strategy!