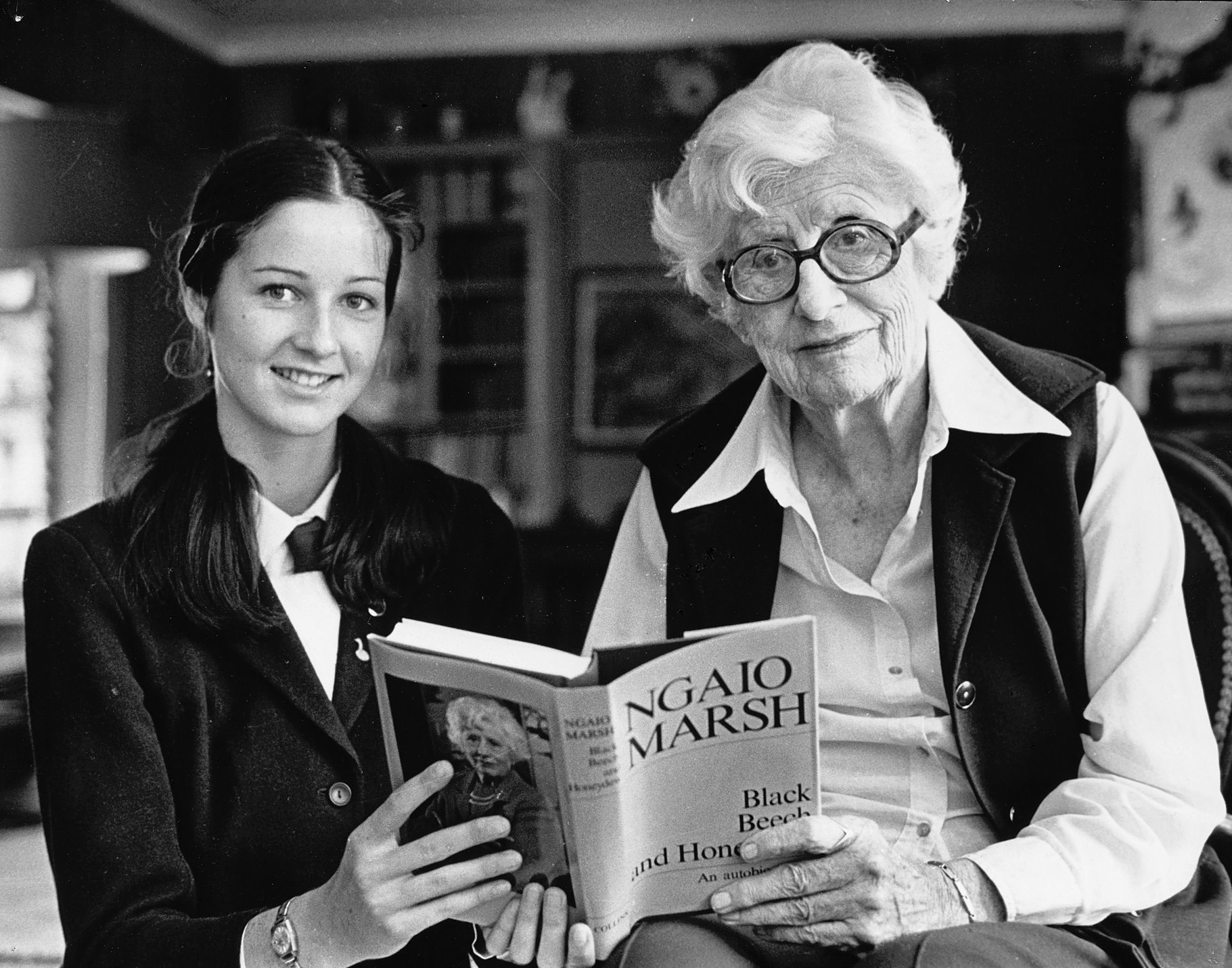 April is the birth month of Dame Ngaio Marsh (1895-1982), one of New Zealand’s most famous authors and theatre directors. Crowned a Queen of Crime (alongside Agatha Christie, Dorothy L. Sayers, and Margery Allingham), Dame Ngaio holds international acclaim for her novels starring a fictional British detective called Roderick Alleyn. Our team in Christchurch were fortunate enough to catch a glimpse into Dame Ngaio’s vibrant and rather bohemian way of life while digitising a collection of photographic prints and negatives held in the St Margaret’s College archive.

Dame Ngaio grew up in Christchurch and attended St Margaret’s College from 1910 until 1914. During this time, she showed significant talent for acting as well as writing poetry, prose, and plays. In her final year at St Margaret’s her classmates performed a play she wrote called ‘The Moon Princess’ which the Christchurch Press called “a clever little play.”

Vickie Ward, the St Margaret’s College archivist, enlisted the help of NZMS to digitise the collection of Dame Ngaio Marsh photographs. There is not a lot of information known about the photographs, nor how they came to be in St Margaret’s possession — they were simply discovered hidden away in a folder with the title “photographs and negatives re. Ngaio Marsh” and mysteriously lack any further information. Now that they are digitised, Vickie will be entering the images and any inscriptions found on the back of the prints into St Margaret’s database.

The collection consists of 47 loose photographic prints and 24 photographic negatives. Our team captured the prints at 1:1 scale to 600ppi with a Nikon full frame camera, ensuring that even the smallest details from the prints are preserved; the negatives were captured on a Lanovia scanner to similar specifications.

The digitised images will be shared for the commemoration of the passing of Dame Ngaio, which occurred 40 years ago this year. Vickie says that organisations across Canterbury are collaborating to put together an exhibition to celebrate Dame Ngaio. Set to take place at Christchurch City Libraries, Ngā Kete Wānanga o Ōtautahi, it will open in August and features the digitised photographs as well as other items from the St Margaret’s archives.

After graduating from St Margaret’s, Dame Ngaio attended Canterbury College School of Art with a scholarship hoping to pursue a career as an artist or professional actress. Her artistic talents were incredibly diverse, with painting her initial focus — she even won prizes for her oil and watercolour paintings while at university. When asked why she pursued other creative outlets over painting Dame Ngaio said, “I acquired quite a lot of technical skill, and got quite a long way with my painting, but I never felt I was doing what New Zealand was about with my paint.” Canterbury Museum’s blog on Dame Ngaio’s painting accomplishments offers further insights.

Dame Ngaio was a high achiever in all her areas of endeavour, and while she could have had an illustrious career in visual arts, she instead chose to focus on literature and theatre. Her passion for crime fiction flourished while on a trip to England when she discovered Agatha Christie’s novels and became devoted to her own writing. It was during her time in London that she published her first novel, A Man Lay Dead, which marked the beginning of her acclaimed career as an author. Many declare that Dame Ngaio’s novels elevated the genre of crime fiction in the 1930s — her books combine an elegant literary style with realistic character depictions set in believable social situations. Dame Ngaio had a prolific career; she published 32 novels, as well as numerous plays, essays, and the autobiography Black Beech and Honeydew (1966). While most of her novels are set in England, four of them take place in New Zealand, including Died in the Wool (1944), which was set in her home region of Canterbury.

Dame Ngaio returned to her acting roots after 1942 when she became involved with the Canterbury University College Drama Society, directing more than 20 Shakespearean productions. She served as a great support to the university’s drama productions for years to come — her commitment to theatre is acknowledged in the naming of the Ngaio Marsh Theatre at the University of Canterbury. In 1966, her overwhelming success in the arts was publicly recognised when she was made a Dame Commander of the Order of the British Empire.

Dame Ngaio died in February 1982 in her Christchurch home, a four-room bungalow located on the Port Hills in Cashmere. It is now one of city’s most historic and treasured heritage properties, listed as a Category I Historic Place, and largely remains just as she left it. The Friends of Ngaio Marsh Heritage House take care for the property and offer tours and other special events that are open to the public.

There is no provenance or context surrounding St Margaret’s collection of Dame Ngaio photographs, so it is difficult to assess their true historical value. However, these photographs undoubtedly hold significance to the school community by showing what Dame Ngaio achieved after leaving St Margaret’s, offering inspiration to those who might choose to follow in her footsteps.