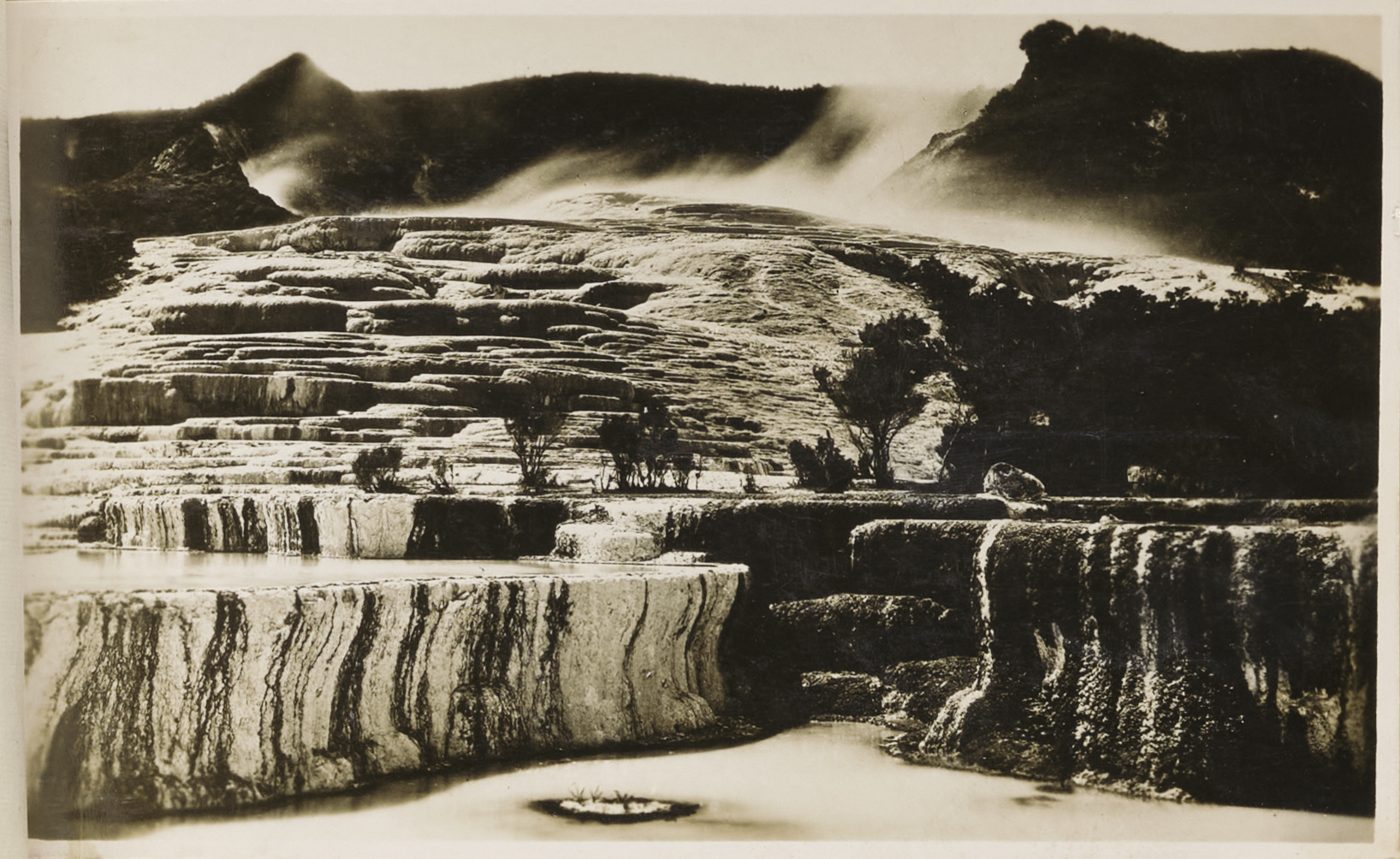 On the second floor of the Rotorua Library Te Aka Mauri, a fascinating collection of historical items can be found in the Don Stafford Room. These items are for reference only and include research notes compiled by historian Don Stafford, historical maps, local newspapers, indexes, books, and publications.

The Eruption of Mount Tarawera (also known as The History of Tarawera) is an incredibly unique book in the collection. It was assembled by Olive P. Pedlar c.1937 to acknowledge the 50th anniversary of the eruption and contains a typed collection of newspapers articles, personal accounts, and related photographs.

The book describes the 1886 eruption of Mount Tarawera, a volcano near Rotorua in the North Island. It was one of the deadliest eruptions in New Zealand’s history, killing more than 120 people and burying many homes and settlements. Notably, it was also thought to have destroyed Ōtūkapuarangi and Te Tarata (The Pink and White Terraces), the largest silica sinter deposits on earth that were considered the 8th Wonder of the World.

The book was recently digitised by NZMS and our team were captivated by some of the extraordinary stories it contained. It begins with an emotive poem:

Night, still and silent, from her couch of clouds
Looked on our Wonderland. No fairer land
In all her wide domain could she behold.
The mighty mountains in the distance rose,
Their bold white summits piercing to the skies,
Snow crowned and bold and aged – Their great hearts
Scarred– rugged– blighted by the mighty fires
Which wasted their fierce youth, and dealt around
Death and destruction in their awful rage.

Sudden. A roar. As t’were the crack of doom –
The moon withdraws her light. The afflicted night
Closes the ebon curtains of her throne.
And Tarawera opens her iron jaws
And pours o’er all the fairy loveliness
A hail of ruin– thunder– lightening– flame—
Stones– ashes—dust! And oh! inglorious mud!
Mud, can it be? Zealandia’ s loveliest,
Most rare, most wonderful, sweet spot of earth,
Her pearl, her paradise, admired of all,
Which lured the traveller from every shore
To wonder and be healed– engulfed in mud!

Graeme Cash, Heritage and Research Specialist for Rotorua District Library, explained that very little information is known about the origins of the book, and it is believed to be the only copy in existence. He explained, “it is kept in a glass case in the Don Stafford Room at Rotorua Library. A black and white photocopy is available for patrons to view in the Rotorua Heritage collection. Digitisation allows us to preserve the original item as well as print the digitised copy to replace the black and white photocopy.”

Our digitisation technicians captured The Eruption of Mount Tarawera with a book cradle and a full-frame Nikon camera. It was a challenge to digitise because of its tight binding and fragile pages. The book’s condition meant that it could not be flattened under glass— instead our team used Perspex fingers to gently hold each page flat and ensure all details could be digitised.

The author of the book, Olive Pennell Pedlar, was born in 1905 and she passed away suddenly in Rotorua on March 8, 1964. Her book includes many harrowing eyewitness accounts of the eruption — an excerpt from Joseph McRae, page 189, can be read below:

As we gathered and waited in this room, with one lamp given a feeble illumination, and the rock particles falling more and more heavily, the glamour and interest of the occasion rapidly faded!

We had nothing to do but wait: what was happening to the rest of the village, including my wife and baby? We could only guess, we waited, while a couple of hours dragged past. Bainbridge was writing up his diary.

People spoke little: there was no panic, no noticeable excitement. All of us were resigned to whatever the future held. Bainbridge finished his writing, closed his diary, and proposed prayer… Bainbridge’s diary was later found on his dead body. Its last entry, which was surely prophetic, went: “at the foot of a volcano — do not expect to live through the night.”

Another section of significance is commentary about Ōtūkapuarangi and Te Tarata (The Pink and White Terraces) which were thought to have been destroyed in the eruption. An excerpt from the book, page 15, makes a rather predictive claim:

Do the White and Pink Terraces of Rotomahana exist? It is the common idea that these master-pieces of Nature, that have been described as the “eighth wonder of the world” were shattered and completely destroyed by the Tarawera Eruption of fifty years ago.

This is not the belief of Mr. Alfred Warbrick, former Chief Government Guide in the thermal regions, who was born beside the lake 76 years ago… It was his conviction when he surveyed the Rotomahana region immediately after the eruption that the Terraces had been destroyed and he is equally convinced today that beneath a deposit of mud and volcanic ash, perhaps 100 feet deep, the Terraces await disinterment.…

“Think of the size of them! The White Terraces covered an area of about eight acres, the Pink about five acres. It seems incredible that if this mass of matter was rent, blown up, and reduced to small pieces, not a single specimen should ever have rewarded the eager searchings of the years. Believing firmly as I do that the Terraces were not destroyed but only buried, it is my great hope to see before I die, an effort made rescue them.”

In 2011, scientists found what they believe to be part of Ōtūkapuarangi (the Pink Terrace), 60m underwater in Lake Rotomahana. A joint New Zealand-United States project team, led by Cornel de Ronde from GNS Science, mapped the floor of Lake Rotomahana using two automated submarines and made the discovery. Since then, there has been many studies and claims made about the current location and state of the terraces. It seems Alfred Warbrick might have been correct!

The Eruption of Mount Tarawera provides interesting insights into one of New Zealand’s most extreme natural disasters. However, it also demonstrates the kindness and support communities can summon in times of crisis to help those in need. Digitising Olive P. Pedlar’s book ensures the stories and lessons it conveys can be passed down and shared with future generations.