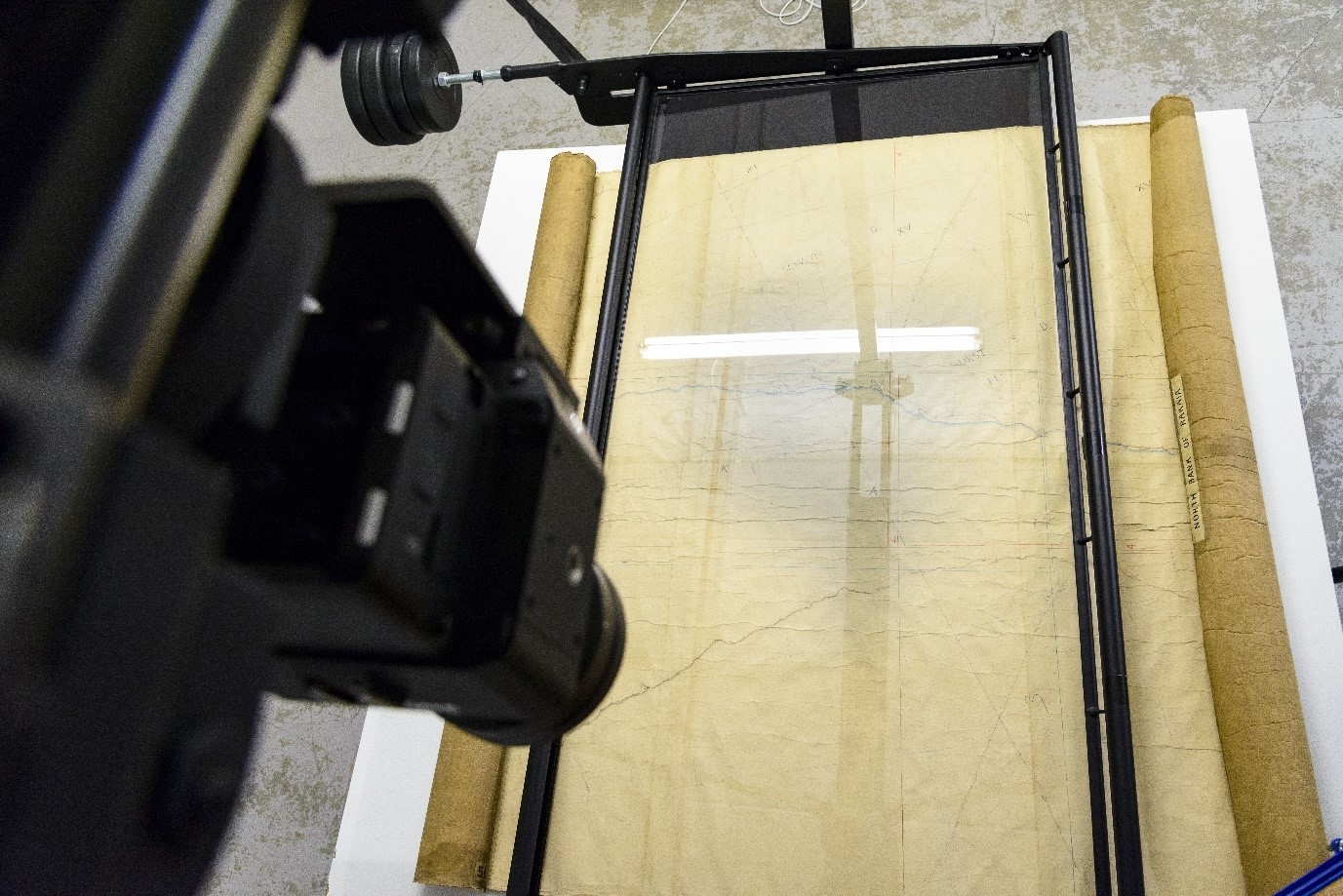 Phase One medium format digital cameras produce images with unequalled quality and provide a solution for accurate digitisation of cultural heritage artefacts. They are the camera of choice for NZMS and are often utilised for large format projects that require very high resolutions – such as the joint endeavour by Land Information New Zealand, Archives New Zealand, Te Rūnanga o Ngāi Tahu, and Environment Canterbury that began in 2016 to digitise a selection of colonial cartography maps. The NZMS Christchurch Branch were recently given the tremendous challenge of digitising hundreds of these maps in just one month and the Phase One camera was integral to their success.

The maps within this collection are important resources and provide valuable information concerning New Zealand’s geography and history. They were created by early survey parties who explored New Zealand with the help of Māori guides. Surveyors used instruments such as a theodolite to take measurements and make observations in field books for later mapping. The maps document New Zealand’s landscape before widespread European settlement — revealing the original course of streams or rivers, the density and varieties of foliage, potential land uses (such as suitability for grazing livestock), outdated place names, as well as cadastral information (land boundaries and ownership). Many of these maps had a long working life and annotations were frequently added to them – making it possible to see subsequent road names, railway lines, and lessees or purchasers of land.

Working again on site at the Christchurch branch of Archives New Zealand, where an extensive selection of the maps are stored, our team were able to digitise 366 maps within the month long time frame. The maps are incredibly fragile, frequently composed of paper glued to linen, and date back to the mid-19th Century. After decades of being tightly rolled and left in storage, there was understandably some degradation present – evident by frayed edges, fly away pieces and even some which had sustained large tears. The state of the maps proved to be a major challenge within the capture process because intricate details, often obscured by these defects, are essential to accurately interpret the map. 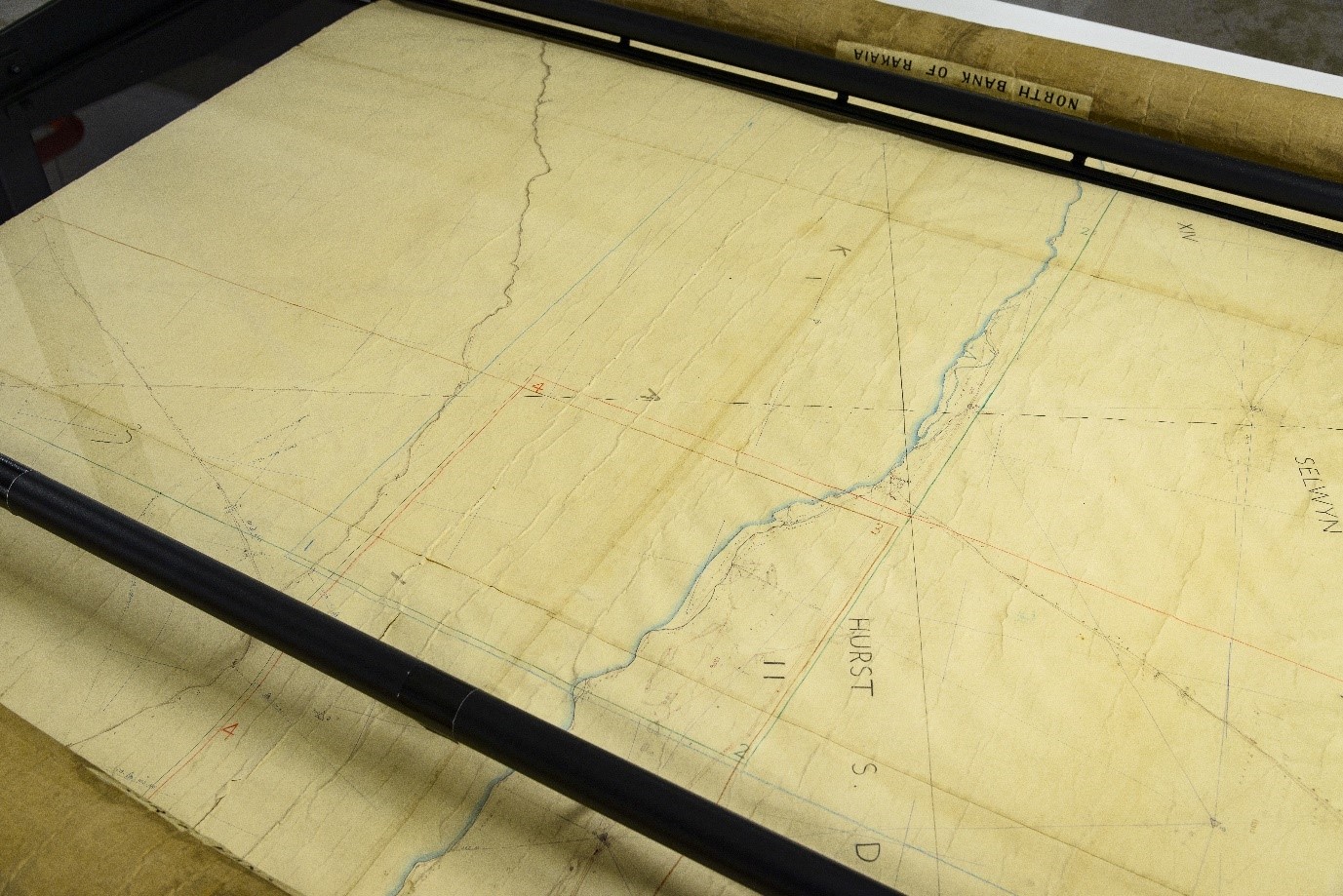 To aid in this venture, a purpose-built rig was crafted by NZMS when the project first began in late 2016, designed specifically to work with a Phase One camera, which is placed on an overhead gantry with pulley system to move across the wide copy board below. There is a lifting glass plate attached to the copy board that flattens the map and secures it, as well as any loose pieces, for capture.

The maps within this batch ranged in size from just 30 centimetres up to four meters wide – most of the maps could not be captured in just one image. Multiple photographs were taken of each map which were then processed in Capture One and Photoshop to create a singular image. The photographs taken with the Phase One camera allowed our team to capture an exact digital replica of the original map at a 1:1 scale and 300ppi. Many of the digitised maps can be found on Archives New Zealand’s Archway website and NZMS’s Heritage Maps platform.

A Phase One camera equipped with an IQ3 (100MP) digital back and Schneider Kreuznach (80mm 2.8 LS Blue) lens was used for this project. The camera was selected because of its ability to photograph in high resolutions and because of the incredibly detailed, clean images it produces ­— making it the perfect tool for cultural heritage digitisation. The resulting digitised maps have such high image quality, that you can even see the texture of the graphite pencil marks on the paper. They are incredibly lifelike representations — to the extent that, at first glance, they are almost indistinguishable from the original when printed to scale.

As advocates of Phase One equipment, NZMS are licenced re-sellers of the Phase One iXG System – a camera that has been specifically designed for use in the Cultural Heritage sector. It has Capture One Cultural Heritage integration which means it can work in sync with Capture One software. This built-in integration allows for absolute control of your tethered camera, automatic and intuitive editing functions including auto cropping and alignment tools, and consistent performance — all of which exponentially speed up workflow and efficiency.

Large digitisation projects, like that of the colonial maps, can be tough on photographic equipment, so it is vital that they will be able to stand up to repeated and prolonged use. Our team needed a heavy-duty solution and a Phase One camera was the perfect choice. They are very durable, constructed with aircraft-grade aluminium, and feature some of the most robust mechanical and electronic components currently available.  Additionally, the mirrorless shutter system minimizes the number of moving parts inside the camera, reducing vibration and ensuring exceptional image clarity.

NZMS rely on Phase One equipment because we can be certain that we are equipped with the most up-to-date tools within the industry. This ensures we can effectively manage the multitude of challenges arising from digitising a range of objects, from large maps to small photograph negatives. Phase One frequently invests in the development of its products, offering tailored solutions and innovative options, so that high quality photographs can be safely produced without risking the integrity of the original item.

Capture One editing software is another vital tool that was employed by our team at NZMS to digitise the colonial maps, allowing for the easy management and organisation of the thousands of photographs captured in this project. Each map could be photographed within a distinct session and later it was easily located by the customisable naming/identification features available in Capture One. Tethered capture within Capture One is fast, secure, and very reliable: our team could shoot directly to the computer and determine instantly if a map needed reshooting or adjusting to achieve the best quality possible. This is highly useful when working with historical artefacts, like the maps, where handling should be limited. The live view function within tethered capture is also helpful because it provides an easier way to compose photographs, thereby reducing the likelihood of needing to reshoot an image.

The Phase One iXG System also features the addition of Capture One’s Camera Focus Tool and PPI Assist feature. Even people with little photographic knowledge or training can find it easy to achieve reproduction standards such as FADGI or Metamorfoze: users can select a target resolution, field-of-view, or magnification ratio and PPI Assist will recommend how the camera should be positioned.

Digitisation is a rapidly growing industry within the Cultural Heritage sector. Libraries, museums and other Cultural Heritage institutions are increasingly incorporating digitisation within their collection management and are evolving to appreciate the innumerable benefits that it could offer. Digitisation increases public access and engagement, allows researchers the opportunity to collaborate online, assists in the creation of more precise replicas, and allows for artefacts to be preserved “in time” — ensuring the information they hold is protected well into the future.

At NZMS we believe that a Phase One solution is the prime choice for quality Cultural Heritage digitisation. Request a digitisation quote from one of our branches, or purchase your own Phase One equipment from us, to preserve your collection for the benefit of future generations.

Find out more about the Phase One Cultural Heritage Solution here.