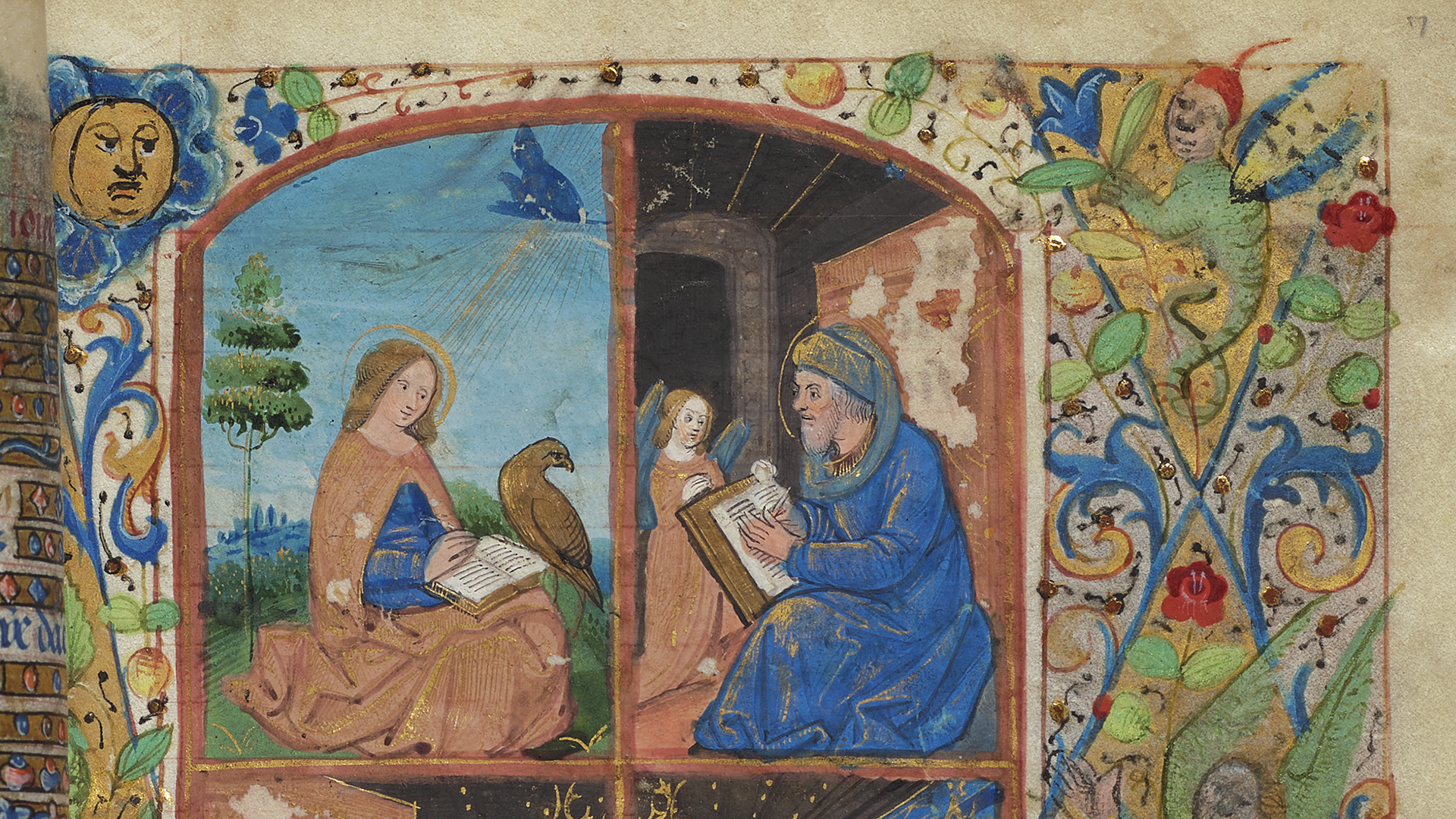 Alfred Hamish Reed (1875–1975), founder of Reed Publishing, was the primary donor of Dunedin Public Libraries’ collection of medieval manuscripts. While he donated his collection to the library in 1948, the success of his publishing company meant he could continue to buy manuscripts for the collection and oversee its development by working alongside consecutive head librarians during the 1950s and 1960s.

Alfred Hamish Reed was an author and educationalist who had a passion for collecting books, autographs, and medieval manuscripts. A devout Methodist, Reed’s greatest literary love was the Bible so he focused on the acquisition of its various editions, in both manuscript and printed form. He also sought out the works of Charles Dickens, material authored by or about Samuel Johnson, as well as various items relating to the history of printing. Reed’s collection efforts, and subsequent donation to Dunedin Public Libraries, meant the establishment of a rare book collection of national importance. The Reed Collection holds around 10,000 items comprising of books (pre-1801 imprints and incunabula), letters, photographs, glass plate negatives, microfilm, records, and other memorabilia.

Some of the most valuable and culturally significant items within the Reed Collection are the medieval and renaissance manuscripts, made up of 11 bound manuscripts and more than 60 leaves and fragments.

Manuscripts, a term originating from the Latin word for handwritten, were very expensive and labour intensive items to create — it often took the scribes and artists crafting them years to complete. Paper was not widely available until the middle ages, so the usual support for medieval manuscripts was vellum parchment which is made from treated and stretched animal skin. Medieval manuscripts survived for such a long time, in relatively good condition, because vellum is more robust than modern paper. Additionally, the ink and pigments used were mineral or vegetable products that resist degradation incredibly well. Manuscripts were treasured by the people who commissioned them — the strong, protective bindings and covers ensured they were safeguarded from external elements and that they would last long into the future.

Manuscripts were passed down throughout generations of the same family and were considered valuable objects of inheritance. Signatures, book plates, and annotations can be found inside them detailing their chain of ownership and giving us clues to the social life of the item — similar to inscriptions found within the Lübeck Bible.

In the 18th and 19th century, medieval manuscripts were frequently “broken” — single pages or sections were removed from bound volumes so that they could be sold to collectors, institutions, or private individuals. The size of these fragments varied from whole pages, to merely snippets from the page they came from , e.g., historiated initials, passages of text, drawings, or borders. Buyers would collect these fragments as a much cheaper alternative for assembling their own survey of manuscript painting and ornaments spanning a range of countries and periods. Today there is a push to reconstruct broken manuscripts and piece together where individual fragments came from — this is usually a challenging, and sometimes impossible, puzzle to complete!

Many of the Dunedin Public Libraries’ manuscripts are illuminated: a term that comes from the Latin word illuminare, meaning to light up or enlighten. It refers to the use of bright, rich colours and gold leaf that medieval artists would decorate letters and drawings. While pages were frequently illuminated to simply enhance their aesthetic value, sometimes important passages of text would be decorated to increase the weight of their meaning.

NZMS’s technicians digitised Dunedin Public Libraries’ medieval manuscripts using a similar approach to the one used to capture the Lübeck Bible. The items are very similar, in terms of their fragility and age, so an almost identical approach was the best way forward. Our technicians assessed each manuscript to determine if there were any potential risks unique to individual items before beginning digitisation — this prevented any damage from occurring during the capture process.

To safely capture the manuscripts, we set our camera up on a 45-degree angle and digitised the pages one side at a time. This ensured the manuscripts did not have to be opened all the way and that the delicate pages and binding would not be damaged. Each item was supported with cushions and the pages were gently held open using mylar strips and acrylic holders. Our team digitised the manuscripts to a high resolution of 600ppi, 1:1 scale with a Phase One 100-megapixel camera. This allowed for two files to be created: a high-definition image suited for zooming in to examine fine details and a smaller public-friendly version that can be quickly downloaded and viewed online.

The medieval manuscripts in the Reed Collection are well-known in Dunedin — library patrons and staff alike raised the idea of comprehensively digitising the collection to provide public access to these fascinating items. Reed Rare Books and Special Collections Librarian, Julian Smith, says that the library intends to make the images available online through Scattered Seeds and investigate the possibilities for promoting the collection internationally for scholarly usage in Europe and North America.

Reed MS6, also known as the Wycliffite Gospels, was one of Dunedin Public Libraries priorities for digitisation because it is rare and precious (being the only copy in New Zealand). Wycliffe Bibles were the first major translation of the whole Bible into English from the Latin Vulgate. It is named after John Wycliffe (c.1384), an English theologian, who was the key figure behind the translation.

Eight years after Wycliffe’s death, his disciple John Purvey (c. 1354-1414) completed a revision of the text in a more natural and idiomatic English compared to the literal word-for-word translation of his teacher. Unfortunately both versions were considered heretical in the Middle Ages and the Church attempted to destroy all copies. Approximately 230 manuscript portions of the Wycliffite scriptures have survived.

The copy in the Reed Collection only contains the Gospels and the text is from Purvey’s version, dating to c.1440. An inscription within the manuscript reads: “Robert gav[er]om of Bretton in the more ded [cropped].” This suggests the manuscript was written in the Midlands because Bretton is located in Derbyshire. It was acquired on Reed’s behalf at a Sotheby’s auction in 1956 and added to the Dunedin Public Library’s Reed Collection. Wycliffite Bibles are highly sought after by collectors world-wide, but they are especially coveted in the USA where they have become important symbols of the Christian evangelical revival.

Reed MS8, French Book of Hours, is one of the most beautifully decorated manuscripts in the Reed Collection and was a favourite of our digitisation technicians. It originated in Northern France (possibly Rouen), dating to c. 1480-1500, and was written in both Latin and French.

Book of Hours are named for their arrangement of prayers that were meant to be read during certain ‘hours’ of the day. The core subjects within a Book of Hours were a Calendar of Saints, the Hours of the Virgin, the Penitential Psalms with the Litany of the Saints, and the Office of the Dead. They were small portable prayer books for laypersons, a counterpart to the much more extensive breviaries used by clergy. They reached an enormous audience because they were the first text to be read all across Europe by people at every level of literacy.

The Reed Collection’s French Book of Hours is richly decorated with more than fifty miniature paintings. Every page is filled with borders of geometric designs containing flowers, vines, fruit, as well as the occasional fantastical creature, figure, animal, or insect. The opening section contains twenty-four small rectangular miniatures in the vertical borders of the calendar pages, depicting signs of the zodiac and the labours of each month.

The French Book of Hours was purchased by A.H. Reed in 1949 from a bookseller in Exeter and added to Dunedin Public Libraries collection.

Reed MS5, a composite Book of Hours written in Latin, is noteworthy because it has a particularly complex provenance and contains highly personalised content.

This manuscript is made up of three distinct components:

Reed MS5 is also known as the Fitzherbert Hours because it was owned by Margery Fitzherbert, a woman from a prominent legal family in Derbyshire. Her name is incorporated six times in prayers on three leaves within the manuscript. It is an interesting example of the personal nature of the prayer books — for example, if you open the manuscript to the Introduction for the Mass of the Holy Name, there is a small miniature painting that shows Margery Fitzherbert and her husband at prayer.

“There is the unrelenting hand of time, the gradual deterioration of inks and pigments, the slow discolouration and stiffening of parchment. [Manuscripts] grow visually mysterious, like the enigmatic descriptions of common things in medieval riddles.

As a [manuscript] ages, it too transforms into something rich and strange — it’s lost pigments and ink make it an enigma waiting to be known. Even for pages that have escaped severe damage, mysteries abound. There is much to be explored in the materiality of a manuscript. Pages are rich repositories of history: quality of parchment, types of pigments, wear from use, and markings from travels, all make manuscripts instructive witnesses to the medieval world and beyond.”

Cultural heritage institutions frequently hold indispensable knowledge about society, culture, and history. By embracing digital technology, through the implementation of digitisation programmes and online collection management systems, institutions can preserve this important information for future generations and share it more easily with the public — providing access no matter a person’s location or socio-economic status.