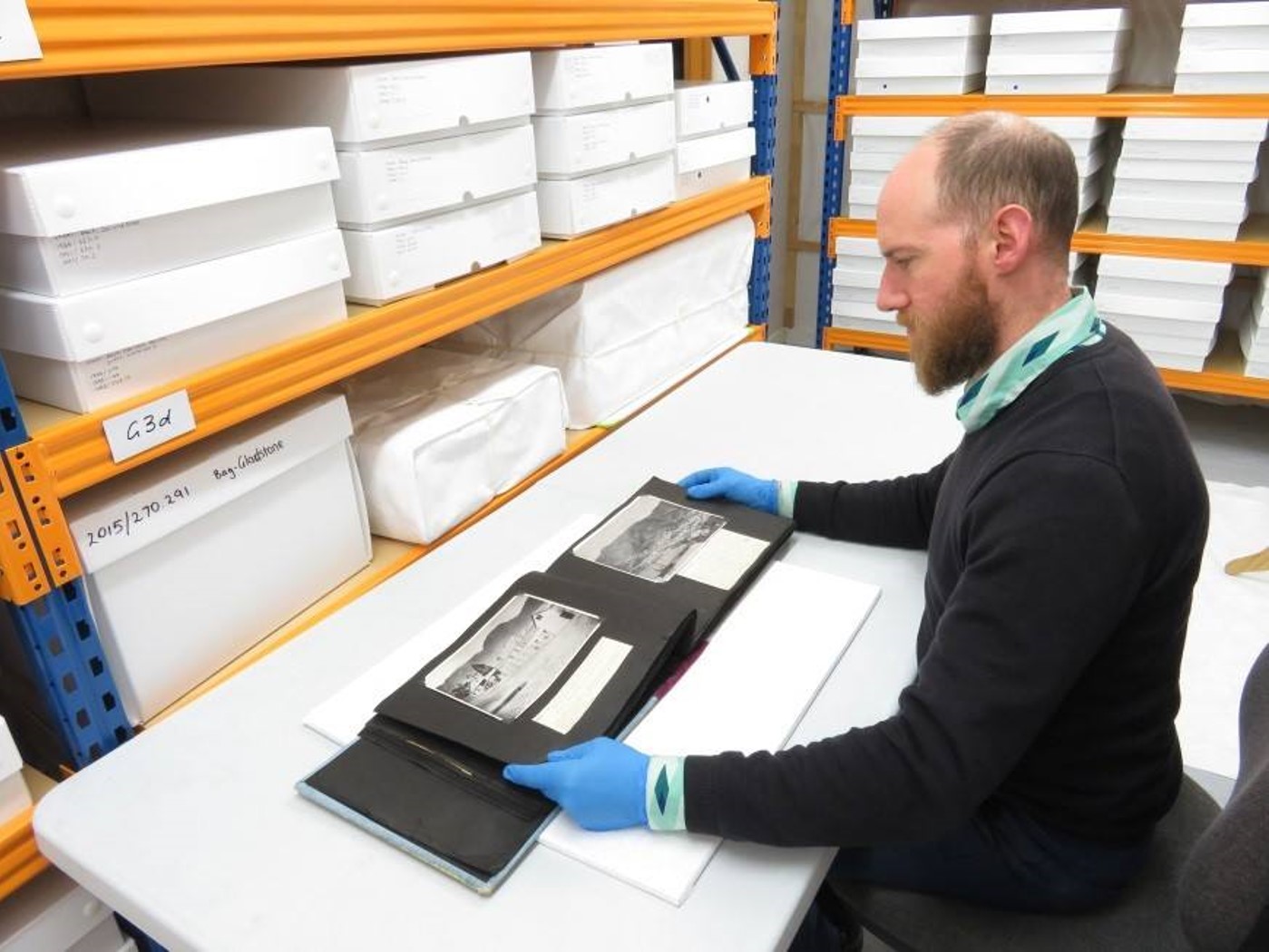 Ōhinehou/Lyttelton is a working port town situated on Banks Peninsula near Christchurch. Originally known as Te Whakaraupō, it was inhabited by Māori before becoming one of the first European settlements in Canterbury. It has rich history centred around providing food and shelter for many diverse communities. Lyttelton Museum is home to numerous historically significant items that have been gifted by locals and visitors to this unique town. The museum aims to continue growing its collection and preserve the artefacts and the stories they evoke for future generations to discover.

In 2018, Lyttelton Museum received a major grant from the Lottery Environment and Heritage Committee to scan thousands of historic images relating to the Whakaraupō area and community. Since then, NZMS have been working closely with Lyttelton Museum and piloted the digitisation project in October of that year. To date the NZMS team in Christchurch have digitised a wide range of the museum’s collection including photographic prints, film negatives, glass plates, watercolour paintings, photo albums, and framed artworks. It has been a monumental task for the two organisations, spurring a collaborative effort that culminated in the digitisation of over 11,500 precious items.

History of the Museum

Lyttelton Museum was established in 1968 and is operated by a voluntary organisation, the Lyttelton Historical Museum Society Inc., with support from local businesses and the community. It is predominantly run by a team of dedicated and committed volunteers that are passionate about caring for and preserving Lyttelton’s history. Through community involvement and contributions, the museum’s collection has grown exponentially since it opened, incorporating items of national and international significance — including rare objects from Antarctic expeditions that departed from Lyttelton. In addition to material objects and ephemera in the collection, there are also thousands of photographs, film negatives, and records, some of which had never been seen or catalogued. On 4th September 2010 Christchurch experienced a 7.1 magnitude earthquake and the Lyttelton Museum was plunged into a period of uncertainty and hardship, culminating in the demolition of its building following a subsequent earthquake on 22nd February 2011.

Adding to the stress of the situation, the building was immediately labelled unsafe after the first earthquake and could not be easily accessed to remove its contents. This meant the museum’s extensive collection had to be rescued in a series of risky emergency recovery operations led by the Lyttelton Volunteer Fire Brigade and the Air Force Museum of New Zealand (AFMNZ) before the building was demolished. Nine years on and the museum is still without a permanent home – although plans are well underway – and the collection remains safely stored at the Air Force Museum in Wigram.

The earthquakes made digitising Lyttelton Museum’s collection even more pertinent — ensuring that in the event of another natural disaster, or if the original artefact is damaged, the information it holds is at the very least preserved digitally. Providing alternative access to the collection without an available building was another key imperative. A supportive relationship was forged between Lyttelton Museum and NZMS to guarantee the success of the digitisation project, believing that collaboration between the two organisations would facilitate efficient capture of the valuable items. Additionally, Lyttelton Museum hired a digitisation contractor, Amy Ryan, to share the Christchurch NZMS workspace and aid in the digitisation process by cataloguing, cleaning, and accessioning items – as well as being an integral part of the collaboration between Lyttelton Museum and NZMS.

A large selection of the items digitised by our team were photographic prints – totalling close to 5,800 individual images. Captured on a Nikon D850, a full frame digital SLR camera boasting a 45.7-megapixel senor, the resulting digitised prints are of superb image quality. Due to the high resolution of the photographs every detail is visible, and while this is extraordinary in terms of information preservation, it also requires greater vigilance during the capture process to watch out for foreign particles like dust or rogue hairs. Our team photographed the prints under continuous lights, rather than strobe lights, granting better control of the final image and easier detection of unwanted fragments.

The condition of the prints was variable and some had developed silvering due to the aging of their emulsion. This can produce an unsightly glare or reflection when photographed under continuous light, so for the prints with silvering our team used a Lanovia, a high-resolution flatbed scanner, to capture them and reduce the chance of light interference.

The subjects of the photographic prints are truly fascinating – featuring things like New Year’s Day celebratory explosions and huskies training on Quail Island for Antarctic missions. Digitisation means that not only are these interesting photographs protected, but they can also be more easily shared with Lyttelton’s community and the wider public.

Glass plates were another extensive part of Lyttleton Museum’s collection that required digitisation. Much like the photographic prints, the glass plates were shot on the Nikon D850, but because they function similarly to film negatives, they were placed on top of a light source (a Kaiser light box) instead of in continuous overhead light. The fragile glass plates needed to be carefully cleaned with a soft brush to remove any dust accumulation from their years in storage and earthquake trauma before they could be captured – ensuring a sharp, clear image.

Lyttelton Museum’s framed artworks were the most recent items to be digitised by our team in Christchurch. The works proved challenging to handle, store, and capture primarily because of their fragile condition and varied size — many had not been assessed since their rescue from the structurally damaged museum.

Delivered to NZMS in six 1m3 cardboard boxes, the artworks were dusty, covered with earthquake debris, and some had borer damage. This meant they required fumigation and cleaning prior to digitisation. Amy Ryan, Lyttelton Museum’s contractor, cleaned the artworks by carefully brushing away loose dirt, vacuuming dust, and with the use of a smoke sponge. Even though cleaning improved the capture outcome, the handling was still a complex task because many of the artworks’ frames were damaged or had broken glass.

“With limited space and resources of our own, we found the flexibility of NZMS to be invaluable as we assessed and prioritised different objects for digitisation. NZMS worked in close communication with us and our contractor – together we tested workflows and options, finding a way to get the best capture we could within the time and budget we had available”.

Our team captured the artwork in extremely high resolution using a 100MP Phase One iXR which provides incredible clarity, to the point that even the smallest detail or brush stroke can be examined. One artwork that was particularly unique was a c.1880 black and white photograph that had been colourised with paint featuring a portrait of a man called John Grubb.

Grubb is an important person in Lyttelton’s history because he was among the first European settlers and was the original owner of one of the oldest buildings in Lyttelton that still stands: Grubb Cottage at 62 London Street.

Larger artworks had to be captured in multiple photographs and stitched together later in Adobe Photoshop. One was even so large (1 x 1.6 m) that it could not be captured in our offices and had to be digitised with our capture rig, specially designed for very large format work, at an offsite location. This artwork is an oil painting of Lyttelton harbour in 1900 by John Gibb, a prolific and well-known Canterbury painter.

Lyttelton Museum plan to upload their digitised collection online during the first half of 2020 along with individual accession numbers and relevant information, providing a valuable community resource and allowing some items to be seen by the public for the very first time.

These, and already catalogued items, can be found here.

Christchurch City Council have gifted land in Lyttelton (33/35 London St) for the new museum. The volunteers have been working tirelessly with architects Warren & Mahoney to develop the new building design and are now embarking on a capital fundraising campaign. See Lyttelton Museum’s website for upcoming events and other ways you can help.

Reach out to our team for a discussion about your collections here.